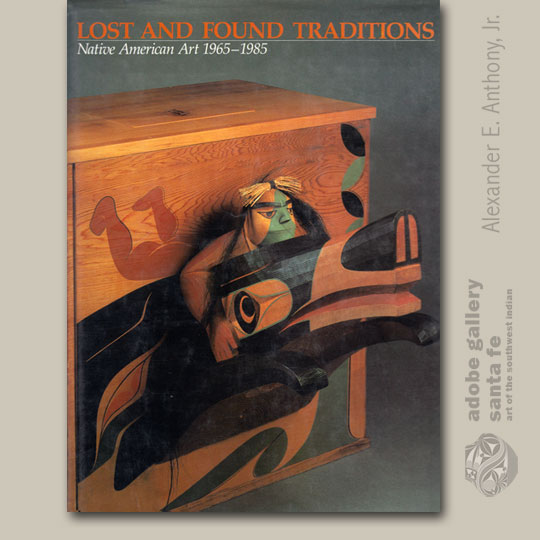 Autographed by the Author. From the Jacket:

Lost and Found Traditions highlights the diversity and richness of American Indian traditional art forms during the last twenty years. Among the nearly 400 works pictured and discussed here, are a wide variety of objects including textiles, pottery baskets, jewelry, and carving. Pieces employing such materials as beads, quills, hides, fur, birch-bark, wood splints, bone, and metal demonstrate the vital continuation and creative expansion of styles and techniques deeply rooted in the past.

Contrary to widespread popular belief, traditional styles and techniques indigenous to native American art are still integral to tribal self-expression. Although much of the native American past has regrettably been lost, much more has been passed on than is often supposed. While many popular exhibitions and books of historical material have been done in the past, Lost and Found Traditions, published to accompany a major exhibition of contemporary traditional American Indian art, is the first comprehensive presentation that examines the survival of these arts into the present day. In the words of Ralph Coe, “Great American Indian art is being made today in both the ‘old traditional’ way and in the ‘modern traditional’ way. These arts are a vibrant testimony to a cultural resilience that has often gone unrecognized and unsung.”

In 1977 the author began a series of field trips visiting tribal groups across the United States and Canada where he was brought into contact with Indian artists. Repeated visits to tribal artisans and dignitaries over an extended period enabled him to establish rapport and purchase works from such diversified tribes as the Montagnais/Naskapi of Labrador, the Sioux and Blackfeet of the Plains, the Miccosukii of Florida, the Pomo of California, the Makah of Washington state, and the Haida and the Gitksan of British Columbia, The art, representing over 100 tribes, both large and small, includes a vast array of objects ranging from work by a twelve-year-old apprentice to works by some of the most celebrated octogenarian tribal elders.

Major highlights are a 35-foot totem pole from the Nishga branch of the Tsimshian peoples of British Columbia, a twined hemp bag from the Narragansett of Rode Island, and an elaborate pair of beaded moccasins, a decorated war shirt, and a beaded rawhide knife scabbard from the Assiniboine/Sioux. All of the pieces in the exhibition are illustrated here, along with annotated catalogue entries, a foreword, and introductory essays.