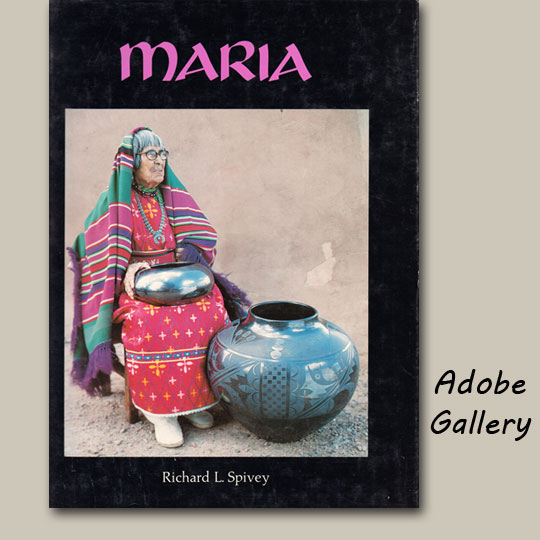 This is the first book by Richard L. Spivey on Maria Martinez and her family of San Ildefonso Pueblo.  Spivey spent many years researching the Martinez family and, in 1979, published this first book.  He later published an enlarged book on the family.

“Internationally recognized, Maria is certainly the most famous of the superb Pueblo potters from San Ildefonso  Since her debut in St. Louis at the 1904 World’s Fair, Maria’s reputation has continued to spread.  She developed her skills within the Pueblo tradition and later these methods and discoveries were taught to other family members.

“Maria is an art book about this legendary potter and her talented family; important information about Julian Martinez, Popovi Da, Santana Roybal, and Tony Da is included.

“Over 60 color and 40 black-and-white images lavishly illustrate this informative and highly readable text.  Laura Gilpin’s historical photographs show Maria at work in San Ildefonso.  Exquisite pieces selected from private collections and museums have been photographed by Jerry Jacka and others and provide excellent examples of Maria’s work.  There are many color plates of the well-known Black-on-black ware so often associated with Maria.  In addition Maria and her colleagues created beautiful Polychrome, Black-on-sienna, Buff-on-Red, and polished wares; fine examples of these have been included.  In many instances the illustrations are accompanied by Maria’s quoted remarks concerning the specific photographs.

“Author Richard L. Spivey is a recognized authority of Pueblo Indian pottery and a friend of Maria and her family.  He discusses their cooperative endeavors and provides important documentation concerning the pottery.  Representative signatures from different periods also are shown.”

More description of this book:

Richard Spivey's large-format book, MARIA, serves as an excellent visual and textual appreciation of the pottery of Maria Martinez, the famous Native American artist of San Ildefonso pueblo in New Mexico. Numerous full-page color photographs of her pottery and black-and-white photos of Maria at work with her husband and son provide a feast for the eyes. You can almost feel the smoothness of the pottery eased into being by her creative hands. Much of the text is taken from oral interviews and reminiscences by Maria herself, who died in 1980 at the age of 97. In 1907 Dr. Edgar L. Hewett of the School of American Research in Santa Fe, New Mexico began excavating prehistoric Pueblo sites near San Ildefonso pueblo. Julian Martinez was hired as one of the laborers in the dig. When his wife Maria saw the shards of ancient pottery being unearthed, she was delighted by the designs. Dr. Hewett asked her to try to reproduce the polychrome pottery with those designs and was amazed by the beauty of her work when he returned the next archeological season. Julian had helped by painting traditional designs on his wife's new pottery. Dr. Hewett bought practically everything they had made. From that moment on Maria and Julian dedicated themselves to pottery.

Over the next few decades, as tourism increased in New Mexico, Maria's fame spread and potters in other pueblos took up the nearly forgotten ancient art. Maria had been attempting to create pottery since the age of seven. There were still two excellent potters in her pueblo (Martina Montoya and Nicolasa Pena Montoya), who encouraged her initial efforts. Their pottery was, as it had always been, beautiful utilitarian pieces - plates, cups, bowls for mixing chili or soup or dough, cooking pots, and large jars in which to wash hair. Clay "ollas" stood outdoors to collect rainwater. Pottery was traded in other pueblos for wheat, corn, or chile, but never for money. However, Maria's pottery would change all that.

Over a 40-year period Julian and Maria shared their labor. Julian gathered clay from the earth. Maria prepared the clay, coiled it, shaped it into pottery, smoothed, and fired the completed pots. Then she polished them with stone or sandpaper. Finally, Julian would paint symbolic designs around the piece. He became the leading pottery decorator and she the leading potter of her pueblo. Encouraged by the Museum of New Mexico to continue spending more time on fewer but higher quality pieces, Maria and Julian produced exquisite shapes and designs, which included clouds, butterflies, plumed serpents (Avanyu), feathers, plants, clouds, turkeys, kiva steps (ceremonial underground centers), and geometric designs.

In 1919 Maria began experimenting with her soon-to-be famous matte-black-on-polished-black ware. After perfecting the right combination of matte and polish accompanied by her husband's designs, Maria unselfishly shared her secrets with other potters. The first Santa Fe Indian Market was held in 1922 under the direction of the School of American Research with all New Mexico pueblos represented. Native clays, pigments, and traditional methods were required in order to participate in the market.  Maria began to win the first of many prizes. In 1924 a bridge was built across the Rio Grande near San Ildefonso and tourists came to the pueblo to buy directly from the potters.

Withdrawing from its physical isolation, San Ildefonso became one of the most progressive arts and crafts centers among Rio Grande Pueblos. Maria and Julian were the primary causes of this new prosperity. Living standards rose in San Ildefonso and other pueblos where arts and crafts were practiced. Income from pottery began to exceed that of agriculture. Domestic problems declined. New houses were built. Maria began teaching classes at the Indian School in Santa Fe. When her husband died in 1943, Maria turned to her daughter-in-law Santana to paint the designs on her pottery. In 1948 Maria's son, Popovi Da ("Red Fox") opened the Popovi Da Studio of Indian Art at San Ildefonso Pueblo to display and sell outstanding examples of his mother's and other pueblo artists' work. In 1950 he began assisting in the painting of some of his mother's pots. In 1956, after a highly successful partnership with Santana, Maria began working solely with her son Popovi Da (Red Fox). He wanted to carry the art further and began experimenting with new designs and new colors and combinations of colors, new finishes, and a higher level of perfection.  He respectfully intended to wait until his mother's retirement before branching out completely on his own, but his early death prevented our seeing where he would have taken his art. Gunmetal, or silver, was one of the new finishes he added to pottery. He was first to add a bit of turquoise to a piece, also. Skunks became a favorite motif that he worked into his designs.

After the death of both Popovi Da and Maria, grandson Tony Da picked up the family tradition of pottery and has carried the art even further into modern designs and styles. This beautiful book serves as an excellent visual and textual overview of Maria's exquisite pottery still unmatched in its fine lines, graceful shapes, and simplicity. As an introduction, there is a moving speech ("Indian Pottery and Indian Values") given in 1969 by Maria's son and fellow potter, Popovi Da, at the School of American Research before his untimely death in 1971.