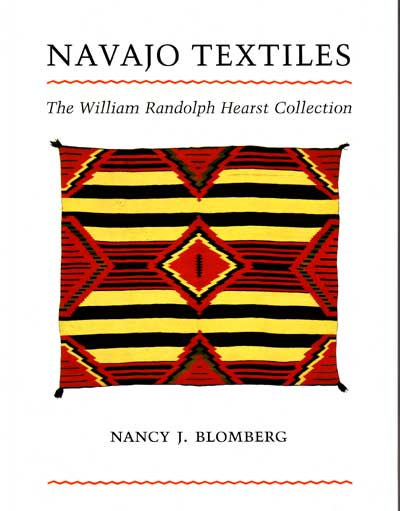 The colorful product of the Navajo loom has long been an object of admiration. Tribes living adjacent to the Navajo in the eighteenth and nineteenth centuries coveted the tightly woven and elegantly patterned textiles as clothing. Increased Anglo contact in the nineteenth century brought a whole new set of admirers, including soldiers seeking souvenirs from their western campaigns, reservation traders eager to expand their businesses, eastern buyers desiring the unusual for their homes, anthropologists studying tribal peoples, museum curators collecting the material culture produced by these peoples, and avid collectors eager to own a beautiful and increasingly scarce commodity.

William Randolph Hearst, newspaperman and consummate collector, also appreciated the Navajo weaver's art. During the first portion of this century he assembled a remarkably complete collection of all of the major types of Navajo textiles woven between 180o and 1920. Now housed at the Los Angeles County Museum of Natural History (LACMNH), the Hearst textiles are only one portion of a larger and mostly unpublished collection.

The study of Navajo weaving has progressed steadily since the scattered descriptive reports of the late nineteenth and early twentieth centuries up to Amsden's (1934) thorough treatment. Many notable scholars have taken up where Amsden left off to advance our knowledge considerably in this area. The serious student should refer to the bibliography for a full treatment of the history of Navajo weaving. The Hearst textiles are presented here in the context of this well-established framework of Navajo textile studies.

Chapter 1, which outlines Navajo weaving history, is intended to provide the layman with a background against which to view the economic and analytical chapters that follow. Chapter 2 documents Hearst's role as an important collector and patron of this art and places his efforts in a larger historical context. An investigation of his interaction with the famous Fred Harvey Company Indian Department and his relationship with its manager, Herman Schweizer, provides new insights about Hearst himself and also important economic information about the role of the consumer in the development and marketing of Navajo textiles. Chapter 3, the heart of the book, provides a detailed scholarly analysis of each textile.

A primary aim of this publication is to bring to the attention of both researchers and the general public this heretofore largely unknown resource. It is an inaugural effort to make the anthropological collections at LACMNH more accessible to scholars and more meaningful to the public at large.