NO TURNING BACK [SOLD] 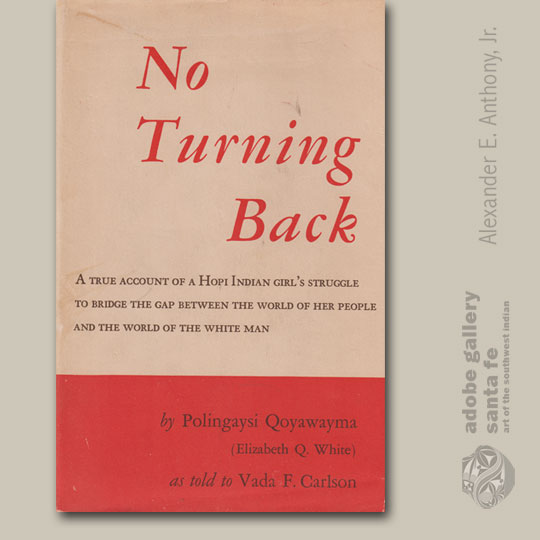 NO TURNING BACK: A True Account of a Hopi Indian Girl’s Struggle to bridge the Gap between the World of Her People and the World of the White Man

Hardback, slip cover,  first edition 1964. 180 pages.  Included with the book is an announcement card for her memorial service in Scottsdale in 1990; an announcement from her nephew Al Qoyawayma of her death addressed to friends of Polingaysi; and an announcement for a scholarship fund at Northern Arizona University.

“Polingaysi Qoyawayma is a Hopi woman who chose in her early youth to live in the white man’s world.She was equipped with unusual determination and intelligence to succeed in a long struggle to obtain for herself, and for later generations of Indian children, an education for that world.

“Her biographer sympathetically records her break with the Hopi tradition that disapproved of all she wanted to do, and describes her endurance of poverty and her own sense of inadequacy outside her native environment.  Later, her struggle was for acceptance of her teaching methods—which were looked upon as radical at the time she developed them.

“Throughout her life she has held to the best in Hopi culture, the dignity and beauty of its religion and philosophy.  Its influence is apparent in her own life, and she fought to maintain it in the lives of her students. This book contains much of Hopi legend and ceremony, and goes far to explain its attraction for non-Indians.  It is an exceptionally valuable record of the life of a remarkable individual who moved from the primitive to the present. Polingaysi Qoyawayma reached her goals with distinction and became, in her own person, a bridge between the people of her two worlds.”