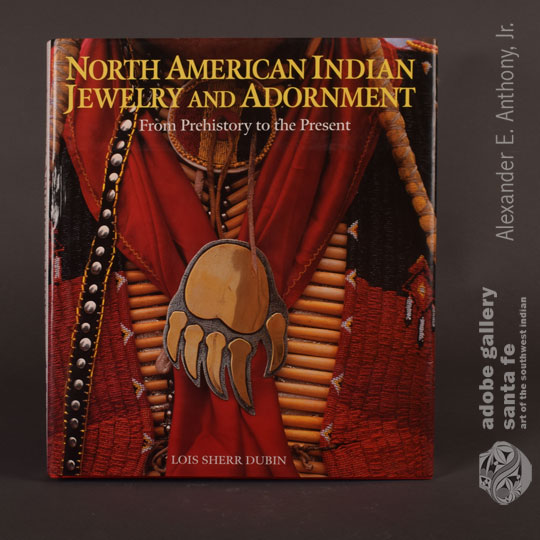 Adornment—jewelry, beadwork, and ceremonial regalia—is a defining medium of cultural expression for North American Indians. Southwestern turquoise jewelry and Plains beadwork are recognized hallmarks of Indian peoples, yet there exist many other examples of Indian artistry, such as beautifully “carved” metal bracelets from the Northwest Coast; quillwork and moosehair objects from the Subarctic; etched dentalium-shell and elkhorn jewelry from northern California; and engraved purple mussel-shell gorgets from Oklahoma and the Southeast. This remarkable book, filled with thousands of beautiful and distinctive objects, many of them never before published, presents the first comprehensive study of Indian adornment from prehistoric times to the present.

For more than ten years, Lois Sherr Dubin, the author of Abrams’ highly regarded The History of Beads: From 30,000 B.C. to the Present, has conducted extensive research, photographed artifacts, and interviewed tribal elders and artists throughout the continent. Dubin sets the stage with an introduction to the earliest known Americans and the artifacts they left behind. She then focuses on the cultures of specific regions, moving across North America, from the Arctic and Subarctic to the Woodlands, the Plains, the Plateau, the Great Basin, the Northwest Coast, California, and the Southwest. Her richly informative text traces the development of techniques and styles across regional and cultural boundaries and incorporates remembrances and insights from dozens of Native artisans and elders. The final chapter features a visit to a contemporary powwow, an important means by which Indian adornment continues to develop and flourish.

Also included are cultural maps that trace trade routes and the movement of European goods in each region, drawings related to jewelry techniques, and diagrams that show how early Indian groups made the most of their natural resources, as well as illustrated sidebars and three sumptuous eight-page gatefolds highlighting such specialties as Northwest Coast bracelets, Southwestern turquoise, and floral beadwork. Dubin's book has a vividness and immediacy that will appeal to jewelry lovers, as well as anyone interested in anthropology and, especially, the fascinating art and culture of North American Indians.  From the Jacket

Forming the Circle: The Early Americans

Flowers and Furs: The Subarctic

Gifts of Shell and Silver: The Woodlands

Basketry and Beadwork: The Plateau

Carvers and Jewelers: The Northwest Coast

Veins of Turquoise: The Southwest

Crossroads Within the Circle