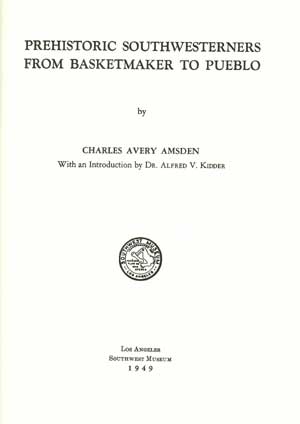 Prehistoric Southwesterners From Basketmaker to Pueblo

We shall never know who first discovered America, or when, but we can almost certainly say where. East Cape, Siberia, faces Cape Prince of Wales, Alaska, across the shallow waters of Bering Strait, with the Diomede Islands midway between. The distance from cape to cape is fifty-four miles. Eskimo live on both islands and mainland shores, paddling back and forth in their skin boats with little thought that they are in fact passing from one hemisphere to another. In severe winters the strait is clogged with ice floes and one may cross on them dry-shod, as Captain Max Gottschalk of Nome did in 1913. When the last glacial advance was at its height, upward of 25,000 years ago, so much of the earth's water supply was piled up in the ice sheets that the oceans fell to lower levels and Bering Strait became a land bridge.

Here, beyond a reasonable doubt, is the high-road by which America got the greater part, and probably all, of its original human population. The statement cannot be proved, but an impressive mass of evidence supports it. The racial group we call the American Indian occupied the entire New World at the time of its discovery by Europeans, and the American Indian is a Mongoloid; that is to say, a transplanted Asiatic. He has the straight black hair, brown skin, dark eyes, high cheekbones, of that great racial stock. Shuffle a group of Hopi Indians of Arizona into a group of Filipinos, and only an expert can pick them out.