Re-Creating the Word: Painted Ceramics of the Prehistoric Southwest [SOLD] 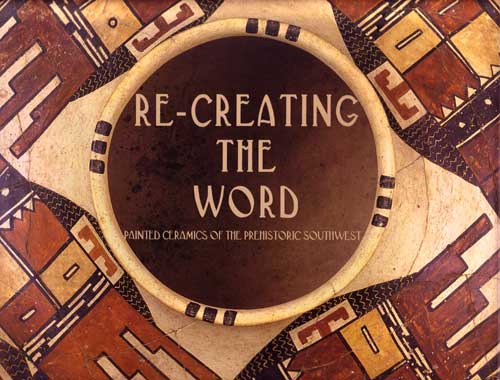 RE-CREATING THE WORD Painted Ceramics of the Prehistoric Southwest

Re-creating the Word presents 130 fine works of ceramic art formed and painted by anonymous artisans of the prehistoric Southwest.  The artworks represent dozens of different painted ceramic types and a variety of styles that originated from archaeology described cultures and span a time period of nine hundred years from roughly A.D. 750 to 1680.

Kayenta- Where the Painted Word Began

Chaco - Land of Light and Shadow

Hohokam - Blood, Water and the Land

Zuni - Breath of the Ancestors

Hopi - Words from the Upperworld

Mimbres - Words from the Underworld

Re-Creating the Word: Painted Ceramics of the Prehistoric Southwest is a survey of prehistoric ceramic art created by anonymous artists of the Southwest. Through an analysis of the ceramic artworks, author Barbara L. Moulard examines the cultural and mythological traditions and worldviews of the Hohokam, Mogollon, and Pueblo (Anasazi) societies. This book introduces fresh discussion and interpretation of prehistoric Southwest ceramics, and new insight and appreciation of the artisans and societies that created them.The 130 artworks presented here have been culled from thousands of examples for more than thirty years. They are some of the most exquisite prehistoric ceramics known to exist, and span a time period of nine hundred years from roughly A.D. 750 to 1680. In Re-Creating the Word, you will see twenty-eight Mimbres bowls, the finest group of Sikyatki Polychromes ever assembled in a private collection, and beautiful and rare Salado, Hohokam, and White Mountain Red Wares.