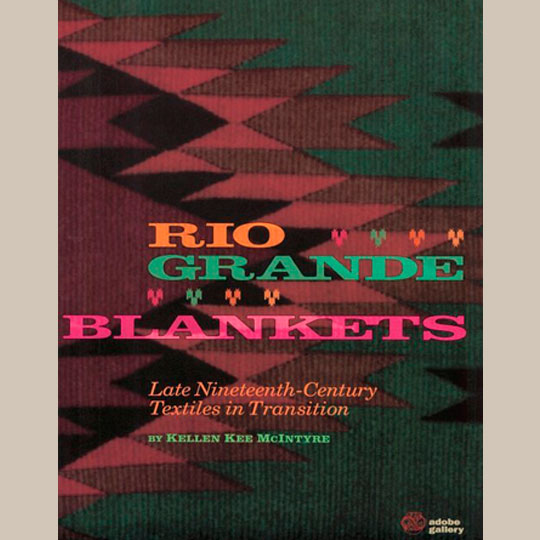 The twenty-seven blankets reproduced and analyzed in this book were woven by Hispanic weavers in New Mexico from the mid-nineteenth century to about 1940.¹ Because many of these weavers lived in the Rio Grande Valley, textiles produced by them are called “Rio Grande blankets.”

The term “Rio Grande blanket” was coined by H. P. Mera in 1910. He used it to refer to all Hispanic weaving in New Mexico dating from the early decades of the twentieth century.² The Spanish had colonized the area along the Rio Grande from the Rio Abajo in Central New Mexico to the Rio Arriba in Northern New Mexico. In the mid-1800s Hispanic colonization spread into the San Luis Valley in Southern Colorado.

The Rio Grande blanket had great cultural and economic importance throughout the history of its production. Produced in the home, for the most part, it represented a total family effort, from sheep raising and wool gathering, to yarn production, weaving and actual use. Special blankets were handed down from generation to generation, revered as important family heirlooms and as teaching examples for future family weavers.

Throughout much of the period of its production, the Rio Grande blanket was a major export good. It was used as a trade item for staples and luxuries not readily available in provincial New Mexico. As the quality and variety of Rio Grande blankets increased in the early decades of the 1800s, they became even more sought after, first as an export to Mexico, and later to the United States.

Cultural changes took place in the 1800s due to an increasing American presence. Slowly at first with the opening of the Santa Fe Trail in 1821, and then more rapidly after the 1850s with the opening of the territory and the arrival of the American military, these influences were reflected in the physical characteristics of the Rio Grande blanket itself.

With the arrival of the railroad to New Mexico in 1879-80, imported inexpensive, time-saving goods, such as synthetic dyes and commercial yarns, previously available in only limited quantities, flooded the local market. American influences were so strong and affected the Rio Grande blanket to such a degree that mid-1900s Southwestern scholars scarcely recognized it as a continuation of the Rio Grande tradition. Only recently these late Rio Grande blankets, referred to as “transitional, ” have begun to be appreciated. Because of early scholarly prejudice and a lack of pertinent data, they were often overlooked and viewed as second-rate. The situation may be likened to that of the post-classic Navajo textiles from the same period, now collected and studied as the prized “Navajo Eyedazzlers. ”

Part One presents a concise history of the Rio Grande blanket, from Coronado's entrada into New Mexico (1540) to the arrival of the railroad in 1879-80. This is followed by an analysis of how the Rio Grande blanket was viewed, collected and studied by American scholars and artists from the turn of the century to the present. And finally, the physical characteristics which separate the transitional period blanket from the classic Rio Grande textile are described.

In Part Two, each blanket in the collection is depicted in photographs accompanied by a detailed analysis and description based on the information presented in the previous section.

The information which led to the identification of the textiles in the collection as Rio Grande blankets was obtained from three major sources. First, the published and unpublished literature were consulted. The most important publication to date, referred to by both weavers and historians alike as the standard reference work on Hispanic textiles of the Rio Grande Valley, isSpanish Textile Tradition of New Mexico and Colorado, edited by Nora Fisher.³

Second, more than three hundred Rio Grande textiles were examined. These are located in the Museum of International Folk Art in Santa Fe, New Mexico; The Taylor Museum in Colorado Springs, Colorado; the Albuquerque Museum in Albuquerque, New Mexico; and the Millicent Rogers Museum in Taos, New Mexico. They were compared with blankets in the collection.

It is hoped that this publication will help to place the transitional period Rio Grande blanket in its broader cultural and historical context, providing a vehicle for a growing understanding of this period in New Mexican history. The textiles themselves eloquently mirror the changes that took place in New Mexico in the last decades of the 1800s.

1. The twenty-seven blankets in this study are from the textile collection of Mr. Will and the late Mrs. Liz Doty of Norman, Oklahoma. They graciously allowed full access to their beautiful collection.