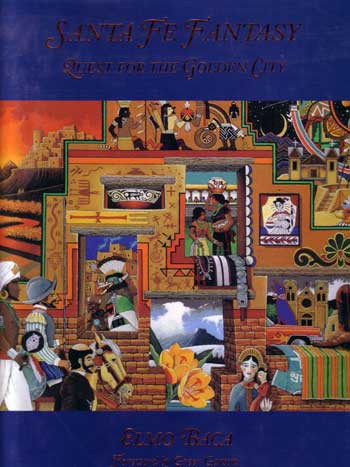 “Santa Fe, New Mexico, has become the nation’s most irresistible city—the destination not to be missed.  Its colorful mix of cultures and races, of exotic artifacts and timeless landscapes, has for centuries inspired fantasies of enduring magic and unimaginable riches, both worldly and spiritual.  Presenting a profusion of illustrations and a lively, informative text, author Elmo Baca shows us why “The City Different” has had such powerful effects on the human imagination and how it continues to draw on the energy of creative transformation while preserving priceless ancient traditions.

“Himself a descendant of one of New Mexico’s original Spanish settlers, Baca captures both the old and the new—a dazzling ambience of light, landscape, architecture, Spanish and Native American culture, and modern high fashion—as no one has ever done before.  He offers fascinating accounts of early Pueblo Indian culture and the Spaniards’ search, over four centuries ago, for the fabled Seven Cities of Cibola— whose streets they imagined to be paved with gold. The author describes Santa Fe’s tradition of spiritual diversity and the legacy of artistic creation from Anasazi petroglyphs, architecture, and artifacts to the work of Georgia O’Keeffe and R. C. Gorman.

“The text is interwoven with historical and contemporary photographs and with works by New Mexico’s most distinguished artists, including Allan Houser, T. C. Cannon, Pablita Velarde, and Douglas Johnson, whose jewel-like evocation of Santa Fe’s many faces was created especially for the cover of this book.”