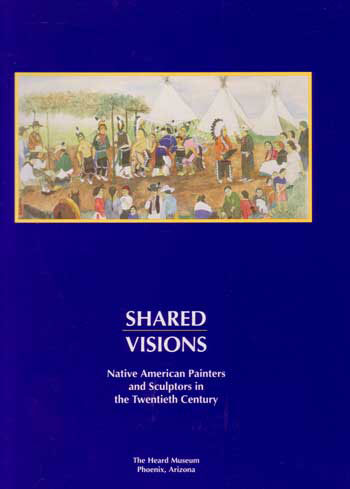 SHARED VISIONS—Native American Painters and Sculptors in the Twentieth Century

There are 76 color plates of paintings by many of the famous Native artists of the twentieth century.

Condition: new book, was shrink wrapped but had to be opened to prepare above narrative

About the book:Shared Visions exhibited the works of major artists of the twentieth century Native American Fine Art Movement. Emphasis was placed upon artists who helped to shape the movement and whose work influenced the direction of American Indian painting and sculpture. Individual works were selected to represent the depth and diversity of Native American art and artists. Art works range from the early narrative paintings of Carl Sweezy (Arapaho, 1881-1953) and Ernest Spybuck (Shawnee, 1883-1949), to a series of works on the topic of “encounter and response” executed in 1990 for this exhibition, therefore, reflects the changing world of the American Indian artist as that world unfolded throughout the twentieth century.