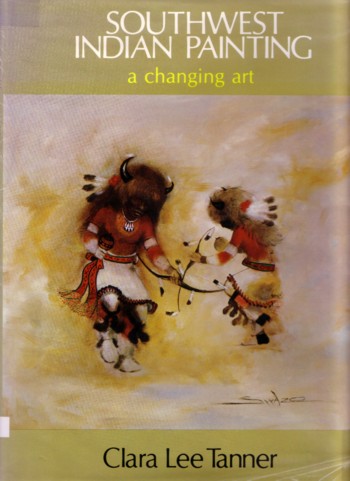 A distinctive mode of artistic expression was born in the second decade of the twentieth century. The pueblo tribes and most important, the men of San Ildefonso - were the first to receive training in the techniques of easel painting. In the years that followed, easel painting was introduced to more of the tribes, including the Navajos and the Apaches.

Among those prominent in this new school of painting were Awa Tsireh of San Ildefonso, and Fred Kabotie and Otis Polelonema, both Hopis living in Santa Fe. From the brush of Awa Tsireh sprang three distinct styles—naive realism modified by conventional themes, and conventional design that approached the abstract or was total abstraction. Kabotie and Polelonema introduced certain traits which became typically Hopi and were not generally used by other pueblo tribes.

Prior to the twentieth century, painting appeared on every material use by the Indians—shell, bone, wood, stone, clay, fabrics, and even on their own bodies. Most of these forms of painting have continued among some Southwest tribes.  Anglo contributions of paper and ready-mixed paints provided yet another medium for Indian painting.  The new art form—easel painting—developed distinctly traditional styles that were deeply rooted in the Indians’ past.

Southwest Indian painting was further influenced by World War II and higher education.  Indians traveling through the U.S.A. and around the world returned with the new concepts and perspectives.  Undertakings such as the Rockefeller Indian Art Project and the Institute of American Indian Arts and Santa Fe exposed Indians to the rich background of Native American and world art, as well as to contemporary styles and trends of painting.  A new and growing body of art buyers pushed the Indians to ever-greater production, influencing the development of both traditional and nontraditional styles.

In continuous transition, Southwest Indian painting is an every-changing and development style, adapting to a changing world.