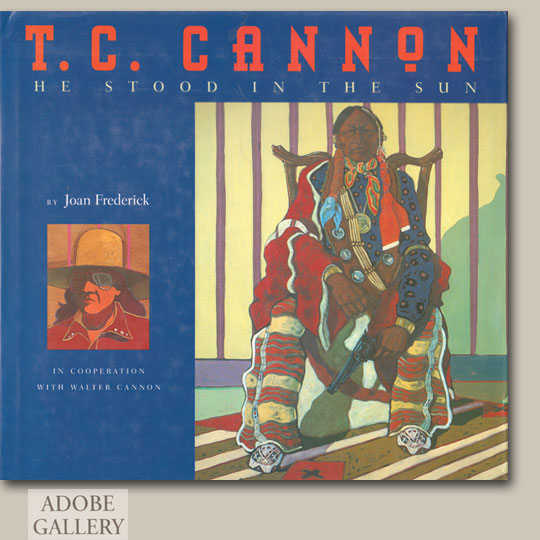 T. C. CANNON He Stood in the Sun

by Joan Frederick in cooperation with Walter Cannon

Condition: very good condition with autographed notation as a gift from author to a friend.

Tommy Wayne “T.C.” Cannon was to the world of contemporary Native American art what James Dean was to American movie culture.  Killed in a car accident in 1978 at the young age of thirty-one, T.C. Cannon is regarded as the most eloquent and innovative of the Native American artists, one who helped change the direction of traditional Indian art to the “New Wave” movement that characterizes that genre today.

In T.C. Cannon: He Stood in the Sun, Joan Frederick, working cooperatively with T.C. Cannon’s father, presents the most comprehensive information available about this talented and influential Kiowa-Caddo artist.  The author shares stories about T.C. in the words of his friends, family members, and teachers—but more importantly, the reader is given the artist’s own view through his remarkable art and his own words as found in the songs, poems, and musings of his sketchbooks and letters.  It is the story of a life, told not with idealism or sensationalism, but with unflinching candor.

From his birth in 1946 in Lawton, Oklahoma, through his schooling during the Institute of American Indian Art’s “golden years” in the 1990s, through his tour in Vietnam, and, finally, through his international success and untimely death, T.C. Cannon displayed an insight into life that strikes chords of understanding in all of us.  His statements emanated from a distinctly Indian point of view, but ultimately, his words and works transcend ethnic barriers and profile the basic values and experiences that bind our human family.