The Arts of the North American Indian: Native Traditions in Evolution (Paperback) [SOLD] 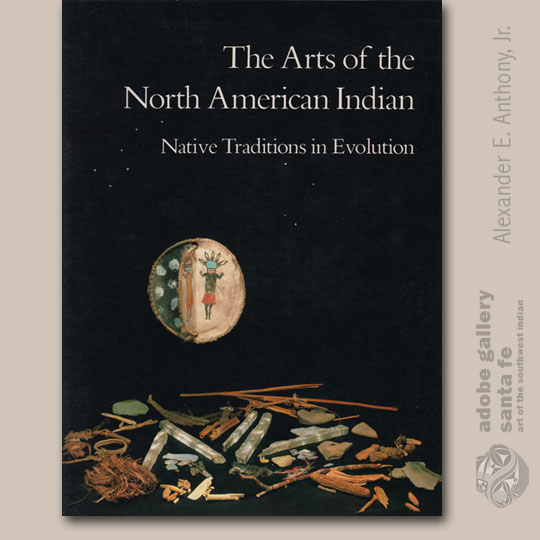 THE ARTS OF THE NORTH AMERICAN INDIAN Native Traditions in Evolution

The idea for this publication and the accompanying exhibition was born in 1981.  The first step, taken in 1981 and 1982, was a comprehensive search throughout the state for Oklahoma’s most telling and significant American Indian masterworks.  Dr. Edwin L. Wade, Curator of Non-European Art at Philbrook Art Center, canvassed over sixty public and private collections, finding a breath and richness in the state’s holdings that were even greater than we had believed, and the project gathered momentum.  The second major step was an international colloquium, sponsored by Philbrook, with invaluable assistance from Phillips Petroleum Company, at which American Indian artists and consultants from throughout the United States met with scholars from five nations.  The text of the present volume arose from this convocation of those whose lives have been devoted to the practice and study of native arts.

This lavishly produced volume provides a unique and comprehensive look at the rich tradition of American Indian art. Fourteen authors, including many of the most distinguished American, Canadian, and European authorities in the field, explore the aesthetic phenomena of Native American art.

The range of their investigation, which includes sociological, anthropological, and art-historical viewpoints, covers a period of more than three thousand years and more than sixty tribes, representing all the major culture areas: Alaskan, Eskimo, Subarctic, Northwest Coast, Plateau, Plains, Great Basin, Southwest, Eastern Woodlands, and Southeast. Hundreds of objects are reproduced-along with much rare documentary material, including photographs of the artists and ceremonies-in 67 colorplates and 211 halftone illustrations. The art ranges from the traditional to the avant garde, and includes ledger drawings, paintings, pottery, blankets, beadwork, carvings, moccasins, jewelry, masks, basketry, and more.

The Arts of the North American Indian is organized to confront seven major issues: meaning, tradition, aesthetics, quality, the place of the creative individual in a tribal society, controversy, and the future (including the interrelationship of Native American art and mainstream modernism). It accomplishes admirably the goal set forth by the project's editor, Edwin L. Wade, Curator of Non-European Art at Philbrook Art Center in Tulsa, Oklahoma: "Posterity deserves at least an accurate record of the brilliance of native traditions, for we, the civilized, have yet to surpass them in either conviction or vision." That vision is captured magnificently in this beautiful volume, the most important book published in many years on the arts of the North American Indian.