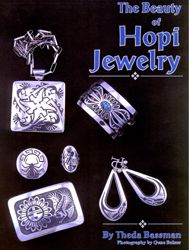 The Beauty of Hopi Jewelry (Jewelry Crafts) by Theda Bassman

The Hopi Indians have developed a unique style of jewelry making. The designs and concepts are parcel of the Hopi religion, life, and ceremonies. Many of the designs depict water in its various forms. Since the land of the Hopi is arid, there is a focus on water needed for their crops and for drinking.

Their jewelry is called overlay and is quite distinctive. It is made by cutting a design out of one piece of silver and soldering it onto a plain sheet of silver. The design is then oxidized with liver of sulfate to produce beautiful shadows and shading.

Originally Hopi jewelry resembled the jewelry of the Navajo Indians. However, in 1947 Paul Saufkie and Fred Kabotie were successful in getting the Federal Government to fund programs to train Hopi G.I.s of World War II in the making of overlay jewelry. This led to the opening of the Hopi Silversmith Cooperative Guild in 1949. The men worked at the Guild on Second Mesa or in their homes. The jewelry was sold through the Guild, thus providing a marketing outlet that would not have been possible otherwise. Fed Kabotie and his wife, Alice, managed the Guild for more than twenty years.

Charles Loloma, a student of Fred Kabotie, was the foremost innovator of contemporary Indian jewelry. In the late 1950's he was the first to use gold and precious and semiprecious stones. This completely changed the “look” of Hopi jewelry. He became internationally famous, and universally acclaimed as a genius in creating jewelry with multiple kinds of stones, using the landscape of his people for his designs. He taught his craft to his nieces, Verma Nequatewa and Sherian Honhongva, and the three became a family of artists. Today the jewelry of the two sisters is as eagerly sought after as that of their uncle Charles. Verma and Sherian exhibit their jewelry under the name of Sonwai. They not only have carried on the tradition of their uncle, but they have also developed their own styles. They too, are known internationally…….