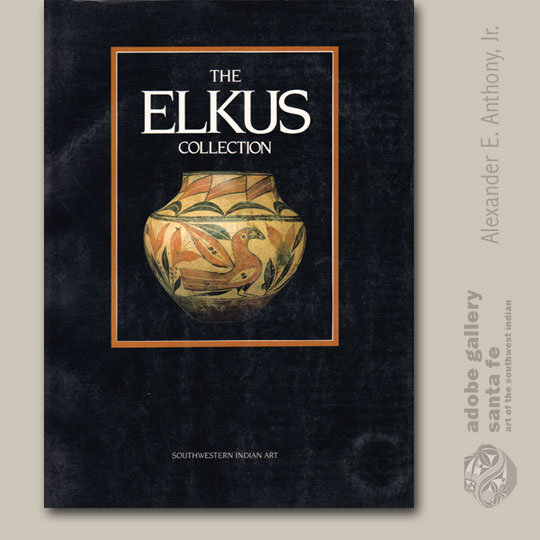 It is too often the case that persons pivotal to the denouement of important events are left unsung, and their important activities simply become a matter of history. If Mr. And Mrs. Charles de Young Elkus had not given their fine collection of southwestern craft arts to the California Academy of Sciences, Mr. Elkus’ efforts on behalf of the Indians of the Southwest and California might never have been properly acknowledged.

We have here, thanks to a bequest from Mrs. Elkus and a generous grant from the National Endowment for the Arts, the opportunity to publish a catalog of the four most substantial portions of the Elkus Collection: Navajo and Pueblo textiles, Pueblo ceramics, Navajo and Pueblo watercolor paintings, and Navajo and Pueblo silverwork. But the important point is that these items were not bought because the Elkuses were “collectors.” They were amassed over a long period because the Elkuses visited the Southwest every year out of a love of the country and a genuine desire to help the Indians. Herein lies the proper understanding of the nature and value of this collection. It should be seen as a statement about a period in Indian-government relations as well as a collection of fine craft objects. Indeed, the fact that these objects are of such high quality attests to the success of Charles Elkus' efforts to focus national attention on the need to protect and promote Indian crafts.

Mr. Elkus always had an interest in the Indians. In 1922 he met John Collier, then president of the American Indian Defense Association. Mr. Collier encouraged his participation in that association, and Mr. Elkus subsequently became president of the central and northern California chapter and a member of the board of directors of the National American Indian Defense Association. The stated objective of this body was “To secure to the American Indians just treatment from the Government and the People of the United States and to promote his welfare.” Shortly after this, Mr. Elkus initiated and then chaired the Indian Section of the Commonwealth Club of San Francisco, a study group concerned with the problems of the Indians of the Southwest.

During Collier's and later Nash's tenure as Commissioner of Indian Affairs in the Department of the Interior, Elkus was instrumental in assessing the Indian situation and tendering advice. He had voluminous correspondence with Collier and with Harold L. Ickes, Secretary of the Interior. Elkus worked tirelessly for the passage of the Wheeler-Howard Indian Bill (enacted June 16, 1934), which abolished the encroaching policy of allotment of Indian lands. For the first time since 1887, Indian land could no longer be sold to non-Indians. It was a major step in the recognition of Indian rights of land and home rule. Other provisions of the bill provided for a credit system and vocational education for the Indians.

Elkus was also very involved in the passage of the O'Malley-Johnson Bill, a plan to improve the educational opportunities for the Indians by delegating more responsibility for Indian education to the states. He urged that government officials make field visits so they would better understand the particular nature of each situation. He argued against the proliferation of separate agencies for health, education, land use, and so forth, and for strong superintendents with direct access to the Department of the Interior in Washington, D.C. Many of the reforms were incorporated into the Indian Reorganization Act of 1934, an important milestone in improving the contact and defining the responsibilities of the U.S. Government toward the Indian.

Of great personal concern to Charles and Ruth Elkus was whether the Indians could survive their inevitable transition into the American economic system. They believed that one viable solution was to encourage the production of Indian arts and crafts. On January 11, 1934, Secretary of the Interior Ickes formally appointed an advisory committee to study and make recommendations on the problem of Indian crafts. This board was a dedicated group which served without pay out of a conviction that the betterment of Indian crafts would well serve the Indian people….

Their assignment was to study the status of crafts among the various tribes and to make recommendations to Secretary Ickes and Commissioner Collier for “practical procedures for organizing marketing methods, improvements and revivals in the arts themselves, and for the training of the newer generation of Indians in their production.”

Source: From the Introduction of this book

Published by the California Academy of Sciences