The Kachina and the Cross: Indians and Spaniards in the Early Southwest (SOLD) 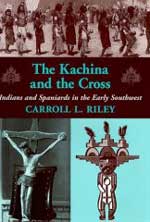 "Here [among the Tewa] and in the other above-mentioned provinces there must be...sixty thousand Indians, with towns like ours and with houses built around rectangular plazas." --Juan de Oate, 1598 At the beginning of the seventeenth century the Pueblo Indians and their nomadic neighbors were at the very edge of the larger world. Their contact with Europeans and Africans had been sporadic, generally unpleasant, and not particularly coherent. In 1598 Governor Juan de Oate changed all that. In THE KACHINA AND THE CROSS, Carroll Riley interweaves elements of archaeology, anthropology, and history to tell a dramatic story of conflict in the seventeenth century. It was at the end of this period of heroic and legendary expansion that the colonization of New Mexico took place.

The Spaniards originally believed their new colony had a wealth of silver and gold. But their mines proved unprofitable, and the region was soon reconstituted as a missionary province. Over several generations, the Franciscan Order built churches in the various Pueblos and carried out a ruthless attack on the Native American religion and culture. The Indians resisted, at first passively, then with growing activism until the region exploded into war in 1680.

Although the Spaniards managed to regain the New Mexico province after twelve years, the western portion was never firmly within the Spanish imperium again-and the Hopi pueblos remained completely outside it. Even in the Rio Grande Valley, where Spanish political control was securely reestablished, the Franciscans were forced to adopt a more conciliatory attitude towards the Indians.

Until now, histories of the early Southwest have tended to concentrate on the Spanish presence. Yet a full picture of the period cannot rely primarily on Spanish sources, In addition to using these Spanish sources, the author utilizes archaeological and anthropological research from the past forty years to shed new light on the fascinating and troubled first century of sustained Spanish-Pueblo relations.