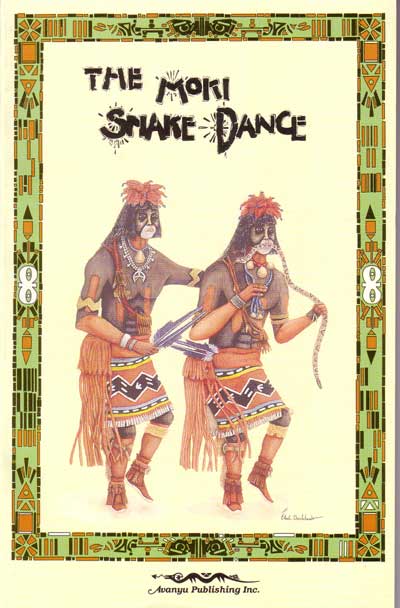 The Snake dance is an elaborate prayer for rain, in which the reptiles are gathered from the fields, entrusted with the prayers of the people, and then given their liberty to bear these petitions to the divinities who can bring the blessing of copious rains to the parched and arid farms of the Hopis. It is also a dramatization of an ancient half-mythic, half-historic legend dealing with the origin and migration of the two fraternities which celebrate it, and by transmission through unnumbered generations of priests has become conventionalized to a degree, and possibly the actors themselves could not now explain the significance of every detail of the ritual.

The story is of an ancestral Snake-youth, Ti'yo, who, pondering the fact that the water of the river flowed ever in the same direction past his home without returning or filling up the gorge below, adventurously set out to ascertain what became of it. He carried with him, by paternal gift, a precious box containing some eagle's down and a variety of prayer-sticks (pahos) for presentation to the Spider-woman, the Ancient of the Six Cardinal Points, the Woman of the Hard Substance (such as turquoise, coral and shell), the Sun, and the underworld divinity who makes all the germs of life. The Spider-woman was propitiated and cordially became his counselor and guide. She prepared a liquid charm to be taken in the mouth and spurted upon angry beasts and snakes for their pacification, and perched herself invisibly on his ear. Then through the sipapu they plunged to the underworld. There, following floating wisps of the eagle's down, they journeyed from place to place, safely passing the great snake Gato’ya, and savage wild beast sentinels, visiting Híanavaiya, who determines the path of the rain-clouds, and Hízriingwikti, the ancient woman who every night becomes an enchanting maiden; had a smoke with Táwa, the Sun, and went with him to inspect the place where he rises; meeting Müiyingwuh on the way and receiving friendly assurances from that creative divinity. He rode across the sky on the Sun's shoulder and saw the whole world, and learned from his flaming charioteer that the possession most dearly to be prized was the rain-cloud. So he returned to the kiva near the great snake, and from the Snake Antelope men there learned what songs to sing, what prayer-sticks to fashion and how to paint his body, that the rain-cloud might come.

The chief gave him much important paraphernalia, and two maidens who knew the charm preventing death from the bite of the rattlesnake. These maidens Tiyo took home, giving one to his younger brother, where the youthful couples took up their abode in separate kivas. At night low clouds trailed over the village, and Snake people from the underworld came from them and went into the kivas. On the following morning they were found in the valleys, transformed into reptiles of all kinds. This occurred for four days. Then (ninth morning) the Snake maidens said, “We understand this; let the younger brothers (the Snake Society) go out and bring them all in and wash their heads, and let them dance with you.” This was done, and prayer-meal sprinkled upon them, and then they were carried back to the valleys, and they returned to the Snake kiva of the underworld bearing the petitions of all the people.