The Navajo and Pueblo Silversmiths 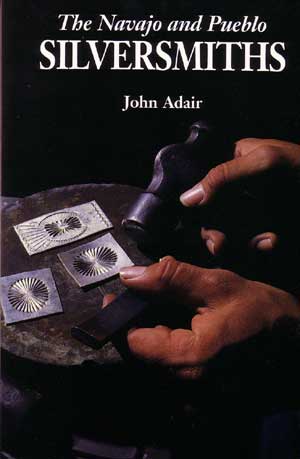 The Navajo and Pueblo Silversmiths (Civilization of the American Indian Series)

Probably no Native American handicrafts are more widely admired than Navajo weaving and Navajo and Pueblo silver work. This book, which is now in its third large printing, contains the most important and complete account of Indian jewelry fashioned by the Navajo, the Zuni, the Hopi, and other Pueblo peoples. "With the care of a meticulous and thorough scholar, the author has told the story of his several years' investigation of jewelry making among the Southwestern Indians," says The Dallas Times Herald. "So richly decorative are the plates he uses ... that the conscientious narrative is surrounded by an atmosphere of genuinely exciting visual experience." John Adair is a trained ethnologist who has lived and worked among these Indians.

To prepare his book, Mr. Adair made an exhaustive examination of the principal museum collections of Navajo and Pueblo silver work, both early and modem, in Santa Fe, Colorado Springs, Chicago, New York, and Philadelphia. He visited trading posts in the Indian country and examined and photographed silver on the pawn racks and in important private collections. He lived for a time among the Navajo, watched them make their jewelry, and actually learned to work silver himself in the hogan of one of the leading artisans, Tom Burnsides. Many of the photographs he made at the time are used as illustrations in this book. He spent months among the Indians in New Mexico and Arizona and became personally acquainted with many of their silversmiths. Later, as field worker for the Indian Arts and Crafts Board, he studied the economics of Navajo and Pueblo silversmithing; and still later he became manager of the Navajo Arts and Crafts Guild, a tribal enterprise.

The Navajo and Pueblo Silversmiths provides a full history of the craft and the actual names and localities of the pioneer craftsmen who introduced the art of the silversmith to their people. Despite its present high stage of development, with its many subtle and often exquisite designs, the art of working silver is not an ancient one among the Navajo and Pueblo Indians. There are men still living today who remember the very first silversmiths.

Mr. Adair gives full details, as he observed them, of the methods and techniques of manufacture over a primitive forge with homemade tools. He tells both of the fine pieces made for trade among the Indians themselves and of the newer, cheaper types of jewelry produced for sale to tourists. He discusses standards and qualities of Indian silver and describes the work of the Indian schools in helping preserve traditional design in the fine silver of today. His excellent photographs of some of the most notable pieces, old and new, provide examples for evaluation. This volume, therefore, will serve the layman, the ethnologist, and the dealer alike as a guide to proper values in Indian silver jewelry, and will provide the basis for authoritative knowledge and appreciation of a highly skilled creative art.