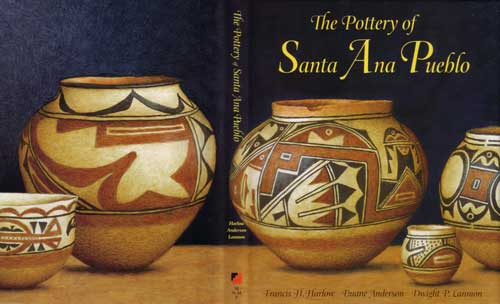 THE POTTERY OF SANTA ANA PUEBLO

The small village of Santa Ana Pueblo in north-central New Mexico has for centuries made distinctive pottery for domestic and ritual use. In this book, the authors relate new ideas about the evolution of pottery styles made at Santa Ana and compare these styles with those found elsewhere in the Pueblo ceramic tradition. In particular, this richly visual study describes the chronological sequence of forms and designs based on evidence not heretofore available. The book analyzes the sequence from the earliest date, circa 1760, when positive evidence of Santa Ana origin can be identified, through the end of pottery making for local use, about 1925, through various revivals to the present time. Museums from around the world have provided examples, many of which have not been previously published. In all, some three hundred and fifty color photographs are included.

The pottery of Santa Ana Pueblo exemplifies the fine artistic achievement that has brought Pueblo ceramics to justly deserved acclaim. In this study, Pueblo pottery authority Francis H. Harlow, along with anthropologist Duane Anderson and historian Dwight P. Lanmon, provides an original and ground-breaking investigation into the origins and evolution of this pueblo's exemplary pottery. The result furnishes criteria for dating vessels from any time period. A chapter on the recognized potters of the twentieth century recounts efforts to keep pottery traditions alive for future working potters.

The Pottery of Santa Ana Pueblo is a book for a wide audience, from ceramic and Southwest specialists to those who appreciate the art of Pueblo pottery, whether collectors, museum-goers, cultural travelers, or avocational archaeologists.