The Pueblo Indians of San Ildefonso a Changing Culture [SOLD] 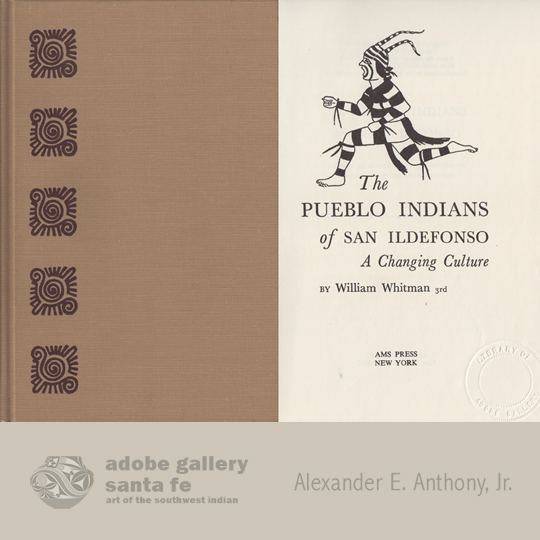 The Pueblo Indians of San Ildefonso a Changing Culture

San Ildefonso has within the last century achieved considerable notice as the home of famous Indian artists, and the pottery and painting of the people have come in for extravagant praise and unusual publicity. All this has had its effect on the pueblo. In comparison with many other pueblos San Ildefonso is wealthy and sophisticated.

As field conditions play a vital part in determining social investigation, I feel that they should be stated clearly for the reader who must appraise the validity of this material and the conclusions drawn from it. Every ethnologist who has done field work among the pueblo peoples knows how extremely reticent and suspicious they are of all ethnologists. Even today in many of the pueblos a white man is not allowed to spend the night within the village, and the fact that the Indians have guarded their secrets well is obvious to anyone familiar with the people and the literature. And not only is the Indian extremely secretive, but there is also a strong prejudice against ethnology and ethnologists among the staff of the Indian service and among many Anglo-Europeans who are emotionally sympathetic to the Indian and who wish to identify themselves with his salvation.

In 1936 my wife and I rented a house in the North Plaza of San Ildefonso and spent the summer there with our three children. The children played with their Indian neighbors, while my wife learned to make pottery. I took notes and genealogies and made inquiries into social organization. It was our policy to avoid questions about religion and religious activities. We made many friends, asked as few direct questions as possible and participated in the village life in so far as we could without antagonizing the people and without losing caste by pretending to be other than we seemed.

We left the pueblo in September, giving and receiving parting gifts. That fall we received letters from our particular friends asking us to return, and in January my wife and I did return in a house trailer to continue our observational studies. This time we made our residence in the South Plaza. My wife remained with me until the middle of February. I stayed until the middle of spring. I rode fence with the Indians, dug ditches, and took part, by invitation, in the annual ceremonial game of shinny and the dance that followed.

The purpose underlying this investigation was to study behavior in a small homogeneous Indian community. We wanted to know, for instance, how the children were brought up, what games they played, what was their attitude toward their parents, their siblings, their friends and enemies. We wanted to know how adolescents and adults behaved, what their interests and problems were. And not only were we interested in all activities, but we tried to determine what individuals thought of one another, and what groups thought of other groups. Then we asked ourselves why the people behaved as they did. Were there any valid correlations for the pueblo as a whole? What traits were possessed by all members of the group, and last, what forces within and without this society appeared to direct its evolution?

This study, however, is not an end but a beginning, since time alone can provide it with proper significance, and it is my hope that our material will provide impetus for further studies by psychologists, sociologists, and social anthropologists in this same field, so that as additional observations are made from time to time such studies will acquire perspective.

Because to certain members of the pueblo any discussion of their affairs must be offensive, I have refrained from thanking individually my Pueblo friends for their assistance or indicating too specifically who my informants were.

But in particular I wish to thank the Columbia University Council for Research in the Social Sciences for its assistance in making funds available for this study; and to thank my wife for her generous and valuable help in the field, and for her labors in the presentation of this material.

I also wish to thank Kenneth M. Chapman for his unfailing encouragement; and the staff of the Laboratory of Anthropology at Santa Fe for allowing me full use of the facilities of the Laboratory.