Book - The Rugs of Teec Nos Pos: Jewels of the Navajo Loom 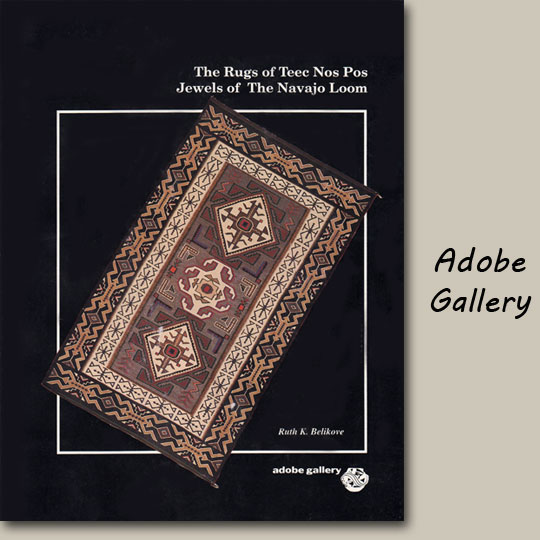 The Rugs of Teec Nos Pos:  Jewels of the Navajo Loom

At first, Teec Nos Pos came to me at my store in 1976, in the form of Bill Foutz. He chewed gum real hard and told me “I had, just had to buy his rugs. They're the best, Androoo.” Wide Ruins* layouts with Teec Nos Pos style panels, Two Grey Hills* colored Teec Nos Pos with Red Mesa* outline and geometric field elements. They were mostly woven of commercial (not handspun wool) yarn. Bill said the Navajo shipped their wool to Boston for cleaning and what came back may not even be the same Navajo wool that the Navajo sent. Such is the color of the reservation.

It is no surprise that the rugs seen in this catalog grew and matured in this particular area of the Navajo Reservation. This oasis, with its opportunity for contemplation, fostered the most complex and communicative of all Navajo 20th century weavings.

*Areas of the Navajo Nation - usually named after the closest trading posts in that area.

One of the most complex regional rug styles to come out of the Navajo Reservation emerged in the area around Teec Nos Pos Trading Post in northeastern Arizona during the first half of the twentieth century. These intricate, colorful rugs, many of which were quite large, have captivated the imagination of dealers, collectors, and museum professionals for nearly a century. Ruth Belikove meticulously gathered her outstanding collection during the 1970s. Her rugs have been exhibited previously at the Nelson Arts Center at Arizona State University, the California Academy of Science, Ohio University, the Grace Hudson Museum in California, and the Yager Museum in New York. The exhibition catalog The Rugs of Teec Nos Pos: Jewels of the Navajo Loom was written by Ruth Belikove and published by Alexander Anthony through his Adobe Gallery in Albuquerque.

Ruth came to visit me in Santa Fe during the summer of 2002 to get acquainted and to tell me about her collection. I was quite impressed with the assemblage and was anxious to find some way to bring the show to Santa Fe. Opportunity knocked in December 2002, when our long-planned exhibition of Tewa culture had to be postponed. We quickly reviewed our options and saw the Teec Nos Pos exhibition as a perfect fit for our available gallery space. I think Ruth was in total disbelief when I called to tell her that we not only wanted to do the Teec show, but also wanted to have it up, with the catalog completed, in three months. The next thing she knew, the art handling company was knocking on her door in California, and the rugs were on their way to New Mexico.

In between regional travel and a trip to Australia, Ruth supplied images of the rugs, read manuscript and label copy, and quickly agreed to a number of proposed adjustments to the catalog in support of our quest to further accentuate the beauty and superior quality of these fine textiles. The result is a truly magnificent and inspirational exhibition that will educate and entertain thousands of visitors during its yearlong run at the Museum of Indian Arts & Culture. If you are not already a Teec Nos Pos fan, well, it's just a matter of time.

Note: All remaining copies have minor wear on their covers.  Price has been dropped to reflect condition issues