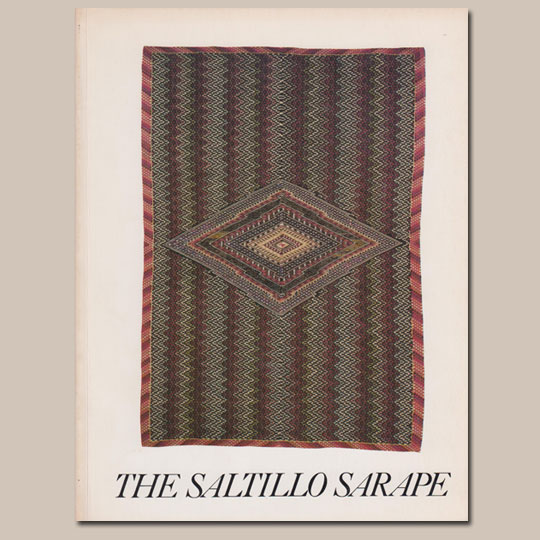 An exhibition organized by The Santa Barbara Museum of Art

“Probably less than three hundred classic Saltillo sarapes are still in existence.  Very few have survived intact, although some are in surprisingly good condition.  There are approximately 150 known examples in various museum collections scattered throughout the United States.  The balance (an estimated figure) are those Saltillos in private collections and in foreign museum holdings  The private collector and art dealer have long been instrumental in the acquisition, preservation and interpretation of art.  Anson W. Hard, Fred Harvey and William Randolph Hearst were such collectors.  The intelligent and farsighted efforts of these and other individuals have formed the few museum collections of Saltillo sarapes.”

Catalog of the exhibit (full-color illustrations)

With the great revival of interest in Native American arts it is only natural that attention would be focused on the uniquely beautiful Saltillo sarapes of Northern Mexico. Contemporary artists and craftsmen are studying native techniques of spinning, dyeing, and weaving to better understand the textile arts of aboriginal America and the developments relating to them. Inevitably, a greater appreciation will result as the creative techniques are better understood in relation to the remarkable heritage contemporary society has received from pre-Columbian America as well as the Spanish Colonial and Mexican periods of the American Southwest.

The so-called Saltillo sarape, a distinctive piece of wearing apparel, has deep roots in North America. In style, design, texture, and color it relates to the pre-Columbian inhabitants of Mesoamerica. As a garment it had a multiplicity of uses in the everyday and special occasions for the society that utilized it.

First, Native American cotton, then later, after the Spanish conquest, wool was woven into a variety of clothing. Styles, shapes and designs were more or less traditional, utilizing patterns hundreds of years old. The woven garments reflected the ingenuity of aboriginal inhabitants as well as the society that conquered them. The subsequent result was a fascinating merging of cultures, arts, crafts, and particularly weaving techniques. There was an artistic and aesthetic evolution particularly in evidence in Northern Mexico and Southwest United States.

As a textile art form the Saltillo Sarape was developed and utilized by the inhabitants of Northern and Western Mexico in the late 17th, 18th and 19th centuries, with a decline in the early 20th century. So distinctive were the products of the looms of Northern Mexico that many travelers commented on the weaving industry, particularly upon the beauty and the utility of the Saltillo Sarape. Throughout its development the Saltillo Sarape became a useful and prized possession as well as a sought-after collector's item.

Artists depicting life in Mexico in the 18th, 19th and 20th centuries often showed the utilitarian Saltillo Sarape. Since that garment had so many uses it is revealed being utilized in all segments of Mexican society. Few items sketched or painted by artists could rival the color of the Saltillo Sarape. Horsemen particularly were among its greatest users and admirers. They found this useful garment valuable in all aspects of horsemanship. Artists depict the vaqueros, the caballeros, and the charros wearing this colorful garment.

In Mexico's struggle for independence in the first quarter of the 19th century the Saltillo sarape style was often shown associated with the Native American revolutionaries. It became a symbol of Mexicanismo; its influence was widespread, inspiring many copies.