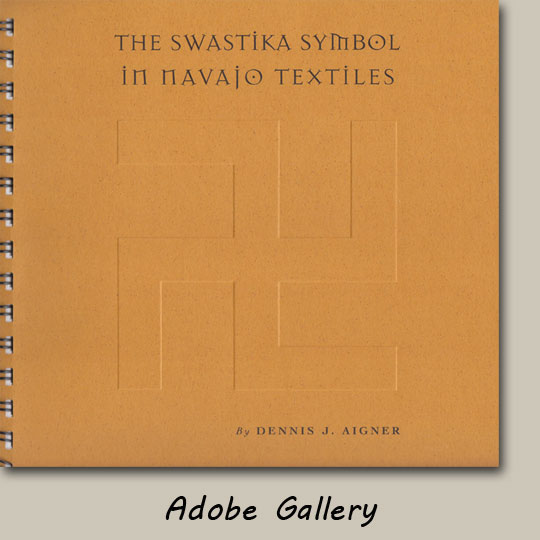 THE SWASTIKA SYMBOL IN NAVAJO TEXTILES

The author, Dennis Aigner, has spent decades studying the use of the swastika symbol in Navajo textiles.  As he learns more and discovers more samples and documentation, he updates his previous edition.  This is the 5th edition, which was published in 2014.

The swastika in human history enjoys a long and positive tradition.  Its main use was as a symbol denoting the four cardinal points (north, south, east, and west; front, back, right, and left) and the winds issuing from them.  The swastika’s connotation with “well-being” or “good luck” is robust across cultures, albeit with various nuances attached.  Its wide geographic dispersion in prehistoric times and ultimate migration to Europe and Africa causes it to appear on the ornaments, crafts, and edifices of many cultures.

In the Navajo culture, a variant of the symbol has its origins in a myth that was rendered in sandpaintings associated with the Night Chant, the “whirling log.”  The incorporation of the symbol into Navajo weavings was encouraged by the two most influential traders of their time, J. B. Moore and J. Lorenzo Hubbell, in response to its widespread acceptance as a design motif by the eastern buyers they hoped to attract.

The swastika’s appropriation by the Nazis during the 1920s is responsible for the negative connotation it has today, a connotation perpetuated in its use by Neo-Nazi groups around the world.  As a result, the swastika does not appear in Navajo weavings or jewelry made after 1940, although its spiritual significance as the whirling log in Navajo culture has not diminished.