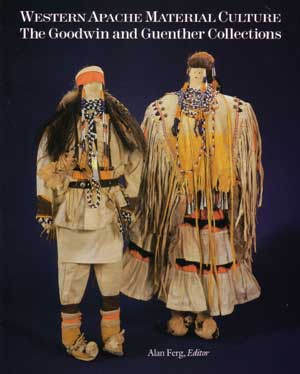 This volume describes in detail two collections of Western Apache artifacts from east-central Arizona. The materials, belonging to the Arizona State Museum, range in age from the mid-1800s to the present and represent a thorough cross-section of tools, clothing, religious paraphernalia, and games. The items show both the continuities and changes engendered by over a hundred years of contact with other Indian groups, Hispanics, and Anglos in the Southwest.

The collectors themselves played important roles in the history of the Apache and the State of Arizona, and their activities are put in perspective by short biographies. Both Grenville Goodwin and Edgar and Minnie Guenther chose to work and live among their Western Apache friends, Goodwin as a self-trained ethnographer, the Guenthers as Lutheran missionaries. These remarkable people profoundly affected and were affected by their contact with the Apache, and they, each in a different way, witnessed, recorded, and assisted the Western Apaches’ adaptation to a rapidly changing world.

Technological details are explained for the artifacts, and their cultural contexts are elucidated through observations made by the Western Apache themselves and through the reprinting of two early articles written by Goodwin. Richly illustrated with artifact figures and color illustrations by award-winning photographer Helga Teiwes and with previously unpublished glass-plate negatives from the first quarter of this century, this book will be absorbing to all who are interested in the life and times of the early West, to both Apaches and non-Apaches, and to historians and anthropologists alike.