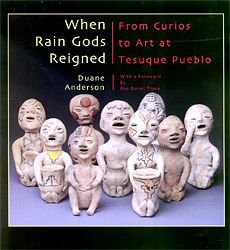 Tesuque rain gods are small, seated figurines with rounded heads, slender arms, slit eyes, “mitten” hands, and extended legs. Rain gods were one of several types of “gods ” made at Tesuque Pueblo for the tourist trade beginning in the 1880s. Some gods held children, animals, or objects; others held parts of their own bodies such as their shoulders (gods of pain) or stomachs (gods of the bellyache or gods of hunger). The ones holding pots on their laps were called “gods of rain.” They outlasted the other types and became known as “rain gods.”

Rain gods and their relatives developed out of an earlier tradition of larger hollow clay figurines, the earliest of which was collected at Tesuque Pueblo in 1879. They continue to be produced at Tesuque to this day, constituting the longest continuous figurative-art tradition in the Southwest. When Rain Gods Reigned: From Curios to Art at Tesuque Pueblo traces the evolution of the rain god from tourist art to Indian self-identity and self-expression. Importantly, it studies a popular form that has heretofore failed to earn the serious attention of scholars and collecting institutions and furthers the discourse on how art is defined and valued.