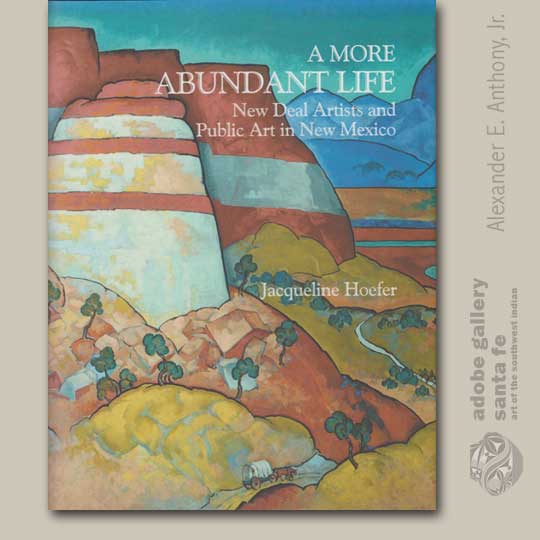 A MORE ABUNDANT LIFE—New Deal Artists and Public Art in New MexicoJacqueline HoeferSunstone Press, Santa FeHardcover with slip jacket, first edition, 2003. 195 pages, beautifully illustrated. Excellent condition“Artists came to New Mexico from everywhere, from Maine to California and a few from Europe.  They were attracted by the dazzling New Mexican landscape, the hospitality of town and village life, and very important, the Indian and Hispanic cultures that had shaped the artistic imagination of New Mexico for centuries.“From an artist’s point of view it was a rich life, and between art and odd jobs, they managed to make a living.  Until the Great Depression of the 1930s. Then, as the artist Louie Ewing said, ‘the jobs ran out.’ No matter what you were willing to do, there was no work, and nobody was buying pictures and pots.“Help came from Washington.  New Deal planners offered artists jobs to ‘beautify’ the community.  Almost, immediately, artists in New Mexico picked up their brushes and chisels, and for almost ten years, between 1933 and 1943, signed onto Federal programs.“How did artists, traditionally loners, like working for the government?  When the Santa Fe artist William Lumpkins was asked, he said ‘We thought it was heaven on earth to be paid to paint.’“Fortunately, many New Deal artists had the opportunity to speak for themselves.  In state-sponsored interviews they tell us in their own words what the New Deal art programs meant to them. Their rich interpretations of that experience and a selection of the work they produced is what this book is about.”CONTENTS The Great Depression in New Mexico by Marc SimmonsThe New Deal for Artists in New MexicoPictures, Pots, Murals, Weavings and Carvings: The Work of New Deal Artists in the Towns and Villages The Artist’s Voice: Interviews with Three Artists Gene Kloss Eliseo Rodriguez Pablita VelardeFurther References to Artists Whose Work is Illustrated