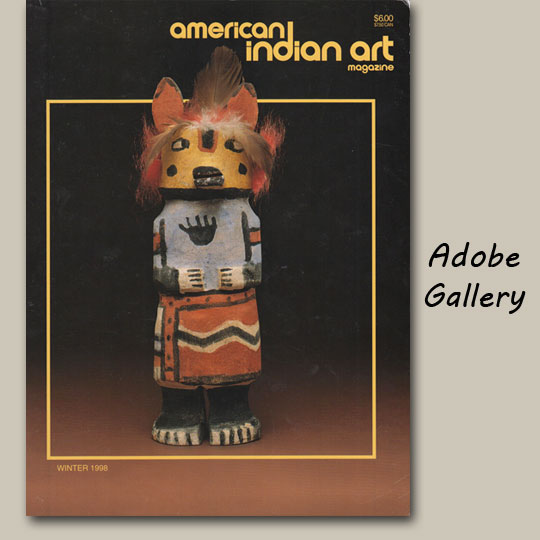 Profiles katsina doll carver Wilson Tawaquaptewa, suggesting that his work is particularly interesting due to the uniqueness of the dolls themselves.  Tawaquaptewa’s importance as a Hopi religious and political figure and the interrelationship between Tawaquaptewa’s art and his religious-political role.

Suggests that decorated saddle blankets—one of the most common types of horsegear used by Plains and Plateau tribes—can be subdivided into five basic shapes—pelt, H-shaped, bordered rectangle, trapezoid, and lobe—each associated with particular tribes or regions.

Written in conjunction with a show at the Hudson Museum, University of Maine, Orono, the article presents an overview of the native beadworking traditions of the Northeast, which have received scant attention in comparison to Plains beadwork.

Offers an overview of the life and career of the last Haida artist Bill Reed, illustrating a sampling of his works in various media—artworks that are widely considered to be among the finest embodiments of Northwest Coast design principles.