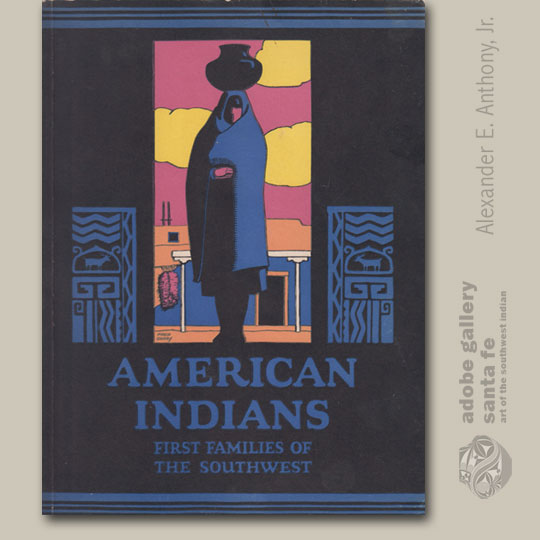 AMERICAN INDIANS—First Families of the Southwest

From the Foreword: “Even in the days when Christopher Columbus was a boy playing about the streets and docks of Genoa, there were little republics scattered through a portion of the America he was to discover.  These peoples of the unknown country built many-storied houses of stone, recognized property rights, had their traditions and religions and chose men to make and administer laws. They elected head men and counsellors corresponding generally to our system of mayors and aldermen.  Among some of them women had rights beyond the hopes of the most enthusiastic suffragette of our time. For the most part they had a regard for law and observed a code of broad morals perhaps surpassing that of the peasants of the days of Ferdinand and Isabella.

“The whites came in contact with these people in 1539 and even then, it is said, the pottery and beautiful garments of the men and women caused much admiration among the Spaniards.  These people grew their own cotton, wove it into cloth, dyed it and made it into garments. They had fields and irrigation works—not makeshift individual schemes, but reservoirs and aqueducts that served the entire community and operated on a communal plan.

“They traded among themselves and with neighboring people, had their own religion and their priests.  When it came to war the Pueblo, the dominant people, were found to be as able as in peace, but they went to battle only in defense.

“While their neighbors, the Navaho, were not the equal of the Pueblo in these steps toward civilization they were far in advance of the Plains Indian of the country north.  The first mention of the Navaho by the Spanish explorers is in 1598 and at that time the Indians had begun their work in silver, an art brought to them by the Mexicans. Surprisingly, weaving came to them through the Pueblo, for the Pueblo were weavers long before the Navaho.  Then when the whites introduced sheep and goats, the Indians began the weaving of wool and the creation of those wonderful blankets that bear their name, an art in which they have been without equal to this day.

“Such were the people of the mountain and the desert in the world that Columbus was yet to find.  Their country was what we now call New Mexico, and Arizona, and today they retain the customs of four centuries ago to a degree equaled by no other people, excepting the Bedouins of the Far East.

“Not all of these early Americans of the Southwest were models of industry, citizenship and domestic duty.  There were Apaches there in those days and they were as adept in the gentle art of murder then as in the 80’s, when Crook and Miles finally rounded up their last little marauding band under Geronimo.

“It’s of these Americans who antedate America that this book tells—of their everyday life, their strange worships, of the men and women and children.”