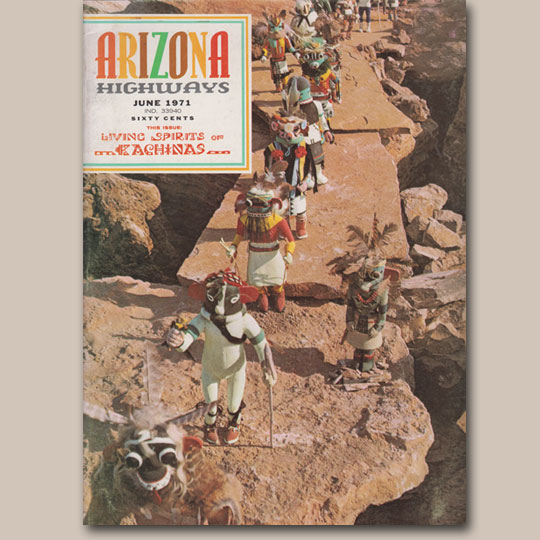 “Ever since J. Walter Fewkes, of the Smithsonian Institution, wrote his first illustrated report on Hopi Kachinas, 1894, an increasing number of people in all parts of the world have become interested in the Hopi Indians’ artistically executed carved and painted Kachina dolls.  Today thousands of people seek and treasure the Kachina doll representations of living spirits, although they don’t know too much about them.  It is remarkable indeed that these figures produced by such a small group of people, living in a world of their own, should find their way into collections numbering into the hundreds of thousands.

“This special issue is unique because it marks the first time that we have reproduced photographs depicting the Hopi Indian Kachina dances and ceremonies, without violating any of the restrictions which have heretofore prohibited photographic exposure of the Hopis’ colorful religious festivals, known as Kachina Dances.  Although the Hopis do not regard their Kachina Dances as secret, and visitors are welcome, photographs are strictly forbidden.”