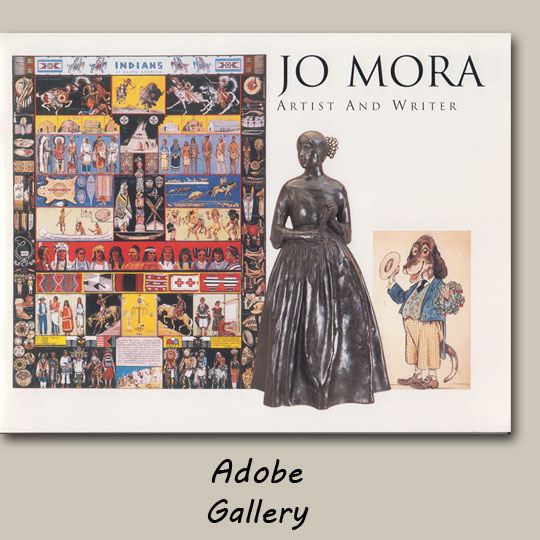 “Early in the twentieth century, no one captured the fading frontier more colorfully than Jo Mora (1876-1947).  No one made more scholarly study of its western subjects, be they human, animal or object, and few artists could match his years spent adventuring in Mexico.  Living with Hopi Indian tribes as an adopted son, he was initiated into their sacred rites.  Traveling the wilderness of the Pacific coast ranges from Old Mexico into the Pacific Northwest, he experienced the ‘Old West’ at a time when the mission chain was crumbling away in neglect and the gold rush was gradually losing its lure.”

The Monterey Museum of Art consistently features the work of artists who have lived and worked on the Monterey Peninsula.  Few have been as popular and well loved as Joseph Jacinto Mora.   This 1998 museum exhibit focused on a number of Mora’s strongest pieces.  This extensive catalog, beautifully illustrated, views the outstanding works of J. J. Mora.  It illustrates that Mora was a true renaissance man—sculptor, painter, saddle-maker, photographer, author, actor, designer of everything from coins and book-plates to houses.