ARTISTS OF THE CANYONS AND CAMINOS Santa Fe, the Early Years [SOLD] 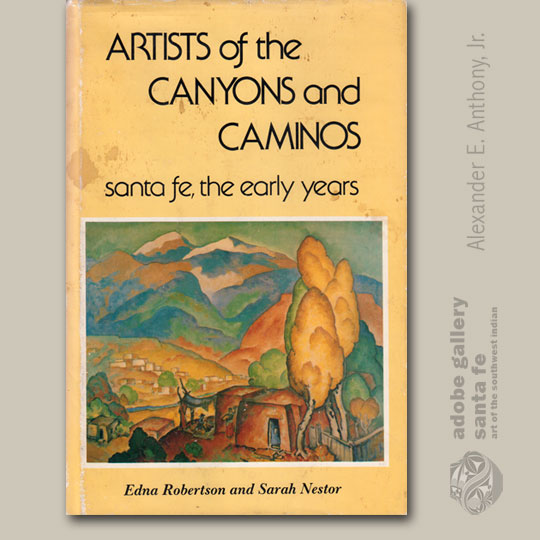 ARTISTS OF THE CANYONS AND CAMINOS Santa Fe, the Early Years

Hardback, protected slipcover, first edition, 1976, 166 pages, illustrated with black and white and with color prints of paintings.  Autographed by both authors.

“When the first American artists started coming west to Santa Fe before the turn of the twentieth century, they found a part-Americanized, part-Spanish town.  During the sessions of the Territorial Legislature there was a great bustle, but the rest of the year it was a small, leisurely, and, to the easterners, very remote village.  Although there was already a small group of painters established seventy mile north in Taos, Santa Fe was not yet an art center.

“Many of the earliest artists came to the city as health seekers suffering from respiratory ailments.  We may be grateful to the dry fine air which brought so many of these talented and renowned people to New Mexico, many of them arriving on stretchers to stay at Sunmount Sanitarium.  The air worked such magic that some of them are still living at a hearty and healthy old age today, providing a link between the beginnings of the art colony and the present flourishing group.  Besides the power of the land and richness of its history, it is undoubtedly the presence of artists that has drawn more artists to Santa Fe.”

Since the beginning of the last century, northern New Mexico has been recognized as an art center, and a number of books have been written about both the Taos and the Taos-Santa Fe artists; but there have been none about Santa Fe artists alone, until now.

Condition: Previous notation on inside front cover indicating a gift to a grandson from his grandmother and dated December, 1976.  One page had a tear which has been repaired with Scotch tape. Otherwise, it is in very good condition.