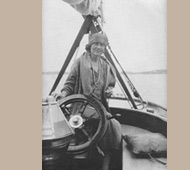 Every other year, the American Ethnological Society awards the Elsie Clews Parsons Prize for the best graduate student essay, in her honor.

Elsie Clews Parsons was the daughter of Henry Clews, a wealthy New York banker, and Lucy Madison Worthington. Her brother, Henry Clews, Jr. was an artist. On September 1, 1900, in Newport, Rhode Island, she married future three-term progressive Republican congressman Herbert Parsons, an associate and political ally of President Teddy Roosevelt. When her husband was a member of Congress, she published two then-controversial books under the pseudonym John Main.

Her work Pueblo Indian Religion is considered a classic; here she gathered all her previous extensive work and that of other authors.