Frank Hamilton Cushing (July 22, 1857 in North East Township, Erie County, Pennsylvania- April 10, 1900 in Washington DC) was an American anthropologist and ethnologist. His pioneering studies of the Zuni Indians of New Mexico by entering into their culture helped establish participant observation as a common anthropological research strategy.

Cushing was born in North East, Pennsylvania, and later moved with his family to western New York. As a boy he took an interest in the Native American artifacts in the surrounding countryside and taught himself how to knap flint (make arrowheads and such from flint). He published his first scientific paper when he was only 17. After a brief period at Cornell University at 19, he was appointed curator of the ethnological department of the National Museum in Washington, D.C. by the director of the Smithsonian Institution. There he came to the attention of John Wesley Powell, of the Bureau of Ethnology. 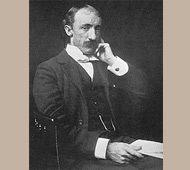 He was invited by Powell to join the James Stevenson anthropological expedition to New Mexico. The group traveled by rail to the end of the line at Las Vegas, New Mexico, then on to Zuni Pueblo where Cushing, "went native", living with the Zuni from 1879 to 1884, becoming anthropology's first participant observer. (This credit is usually assigned to Bronisław Malinowski, whose work with the Trobriand Islanders followed Cushing's stay at Zuni by more than thirty years.) After some initial difficulties (the Zuni seriously considered killing him as he was obviously after their secrets) he was accepted by the community, adopted by the Governor of the Pueblo and participated in Zuni activities. In 1881 he was initiated into the warrior society, the Priesthood of the Bow. He received the Zuni name Tenatsali, "medicine flower." In 1882 he took his Zuni father and fellow Bow members on a tour to the Eastern United States which attracted considerable media attention. This can be seen as part of what Cushing called "the reciprocal method", where he would introduce his anthropological subjects to his own culture, just has they had introduced him to theirs (Green 1990:166). Such practice, a century ahead of its time, is now called "reflexive anthropology". During this tour Cushing married Emily Tennison of Washington, D.C. He returned to Zuni with his wife and her sister.

It was at this point that Cushing became embroiled in a political intrigue. In 1877, President Hayes had signed a bill designating the boundaries of the new Zuni reservation. One 800-acre (3.2 km2) section of Zuni territory called the Nutria Valley had been left out. Three land speculators, including Major W. F. Tucker, arrived in Zuni in late 1882 to claim the parcel for a cattle ranching operation. The angered Zunis appealed to Cushing for help, whereby he wrote letters to newspapers in Chicago and Boston in their defense. Unfortunately, Major Tucker's father-in-law was Illinois Senator John A. Logan, who would become a vice presidential candidate in 1884. Even though President Chester Arthur rewrote the Zuni boundaries in 1883 to correct the Nutria Valley omission, the damage had been done. Senator Logan's reputation had been tarnished in the "land grab" imbroglio. Logan, in his position as U.S. Senator, threatened the Bureau of American Ethnology director John Wesley Powell with funding cuts if Cushing's stay in Zuni was not terminated. Cushing was forced to return to Washington, ending his landmark efforts amongst the New Mexico natives.

He was able to return briefly in 1886 but personal and health problems ruined his stay for him. He was succeeded as leader of the Hemenway Southwestern Archaeological Expedition by archaeologist and ethnologist J. Walter Fewkes.

Other work and death

Work at Hopi: Because of his outstanding work at Zuni, in 1882 Powell sent Cushing on an expedition to the Hopi village of Oraibi. His mission was to council with Oraibi's chiefs and get permission to trade goods for a collection of artifacts and crafts for the Smithsonian expedition. The Oraibi Governor approved the visit and trade, but the ultra-conservative Oraibi Traditionalists held special council and the expedition was forced to leave without trading.

He led the Pepper-Hearst Expedition at Key Marco (1895-1897) and studied abandoned villages in the American West. He came into contact with Stewart Culin on the World's Columbian Exposition with whom he began to write about the history of games. He choked to death on a fishbone on April 10, 1900, while on a research project in Maine.

Cushing was an innovator in the development of the anthropological view that all peoples have a culture that they draw from. He was ahead of his time as the first participant observer who entered into and participated in another culture rather than studying and commenting on it as an outside observer.