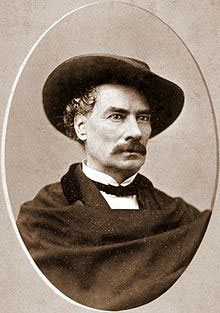 Major John C. Cremony (1815 – August 24, 1879) was an American newspaperman who enrolled in the Massachusetts Volunteers in 1846, serving as a lieutenant.

He served as a Spanish language interpreter for the U.S. Boundary Commission which laid out the Mexican and United States Border between 1849–1852. He went on to serve as Captain in Company B, 2nd Regiment California Volunteer Cavalry a unit of California Volunteers, with the California Column in New Mexico Territory. He eventually achieved the rank of Major in 1864 and commanded the 1st Battalion of Native Cavalry, California Volunteers until 1866. He was the first editor of San Francisco's Weekly Sunday Times newspaper.

Cremony served most of his military career in the Southwest and personally knew Apache Chiefs Mangas Coloradas and Cochise.  He was the first white man to become fluent in the Apache language, learning it in his role as an interpreter, and publishing the first written compilation of their language as a glossary for the army.  As a result, Cremony was often able to resolve numerous issues between the military, reservation authorities and the Apaches. Not all of Cremony's discourses with the Apache were peaceful, however. He killed one warrior in a grueling knife fight and chronicled a non-stop 21-hour chase when he was pursued by a band of Sierra Blanca Apache (White Mountain Apache) of some 125 miles (201 km) through the desert of New Mexico while on horseback; 70 miles (110 km) of which were at a full gallop. Cremony authored Life Among the Apaches, published in 1869, which described his experiences with the tribe. Historians of the West have come to deem many of Cremony's accounts of his Indian campaigns extravagant. The Arizona Evening Star compared his veracity to that of Baron Munchausen, and a soldier who served under him did not "believe anything he says except when he says he wants whiskey."

After retiring from the army, Cremony settled in San Francisco, becoming a founding member of the Bohemian Club and establishing the club's membership guidelines in 1872. He died of tuberculosis on August 24, 1879 and is buried at Cypress Lawn Memorial Park on the Laurel Hill Mound in San Francisco, California.