Momaday received his Ph.D. from Stanford University in 1963. Momaday's doctoral thesis, The Complete Poems of Frederick Goddard Tuckerman, was published in 1965.

His novel House Made of Dawn led to the breakthrough of Native American literature into the American mainstream after the novel was awarded the Pulitzer Prize for Fiction in 1969.

The work remains a classic of Native American literature. 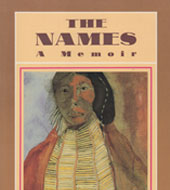 THE NAMES A Memoir [SOLD]