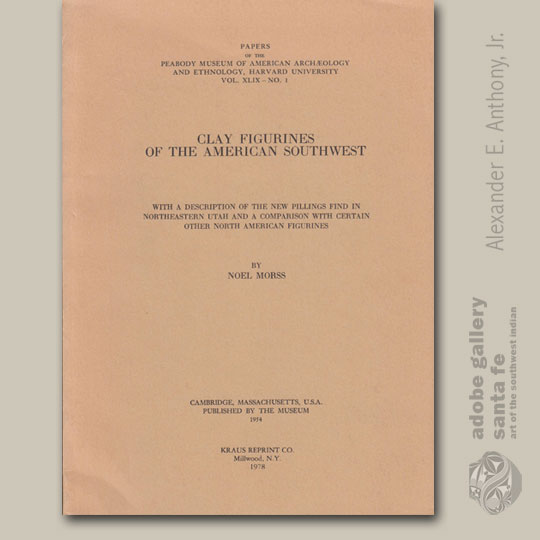 CLAY FIGURINES OF THE AMERICAN SOUTHWEST

Papers of the Peabody Museum of American Archaeology and Ethnology, Harvard University

The first aim of this paper is to present eleven clay figurines from Range Creek, Utah, which, by reason of their size, elaborate decoration, generally good condition, and the fact that they come from a single cache, constitute a significant addition to the corpus of figurines from the Northern Periphery of the Southwest.

The figurines were discovered in 1950 by Mr. Clarence Pillings of Price, Utah.  He and his brother were assisting two men from a neighboring ranch to look for cattle on a high mesa south of the canyon when their attention was attracted by timbers of a ruined room visible in a cave in a ledge a little below the mesa top.  Mr. Clarence Pillings, peering into a small recess in the cave wall, sighted the figurines.  They were taken to the United States National Museum which recommended they be taken to the Peabody Museum, where they were researched and published.

Figurines of the Northern Tradition

Utah west of the Wasatch Mountains

Comparison between the Pillings figurines and others

Figurines of the Southern Tradition

The northern extension of the southern figurine tradition

Pecos and other Rio Grande sites

Figurines Outside the Southwest

Mexico as the source of southwestern figurines

The Function of the Figurines