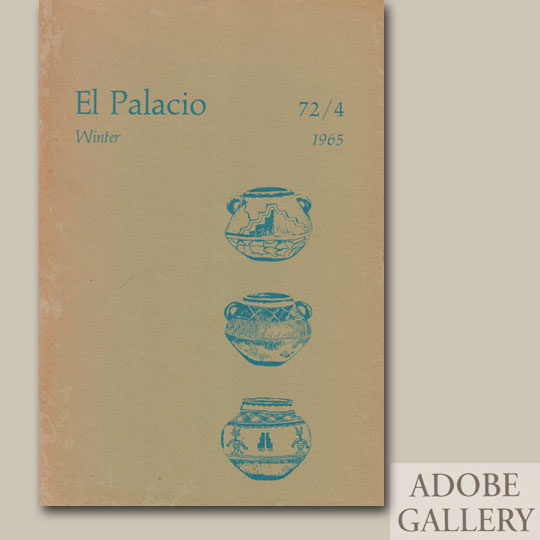 El Palacio, a Quarterly Journal of the Museum of New Mexico

Stabilization of a Mission by Albert G. Fly

Stabilization of the Mission Church and Monastery, San José de los Jémez, founded in 1621-22 by Fray Geronimo de Zarate Salmeron.  Descendants of the Towa speaking people who originally erected the structure are now engaged in its stabilization.

True Folk Arts were made in rural areas far removed from urban centers so that their makers were unaffected by changing styles.  This qualification applies to the colonial Spanish Folk Arts of New Mexico where the people were for many generations far removed from urban centers with their changing styles, but shared the same general background and concepts as well as the same meagre choices of materials with which to create.

Centuries before the European intrusion, the Pueblo Indians of New Mexico and Arizona had developed elaborate religious and ceremonial traditions.  The emphasis of this paper is on one section of the Tewa ceramic history, that of the ceremonial or religious vessels. Only the objective properties of these ceremonial ceramics are discussed; no reference is made to the religious practices or to the purposes for which these pieces were manufactured.

Major Navajo textile designs are geometric, as were all early and “Classic” period examples, yet representational art, too, is a part of Navajo tradition.  Aside from the arrows, Yei-figures, and other Indian motifs, there is a whole category of Navajo design, called “Pictorial,” which flourished during the late 19th Century and persists into the present.

A skull obtained from a small ruin situated about one and a half miles south of Pojoaque was examined by the authors.  The article discusses in detail the findings of their examinations.

Evolution in Lithic Traditions of the Southwest by Kenneth Honea

It is of note that workmanship on tools of the earliest Palaeo-Indian industries of the American Southwest reveals a remarkable degree of specialization and skill in the working of stone.