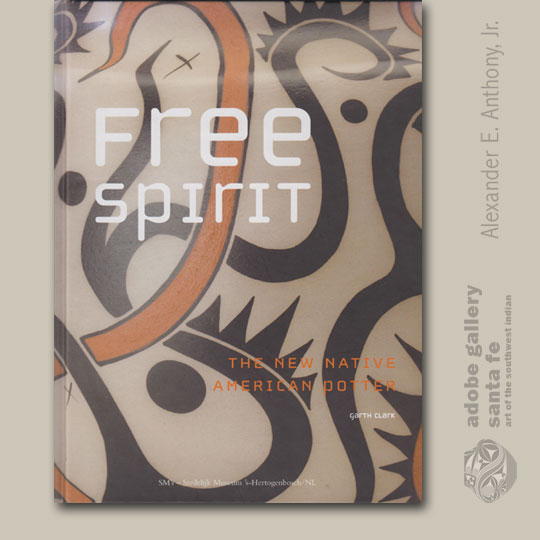 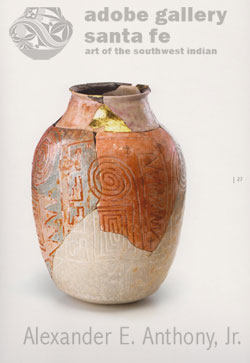 by Garth Clark (curator of this museum exhibit)

“The history of Native pottery in the Southwest is around 2,000 years old and can be divided into four main phases: Prehistoric, Historic, Revival, and now Free Spirit.  The Prehistoric period gave us the genius of Anasazi and Mimbres pottery and lasted until 1540.  That year saw the Spanish entrada and therefore the beginning of the Historic period.  This brought the first European influences into Native lives, not just affecting arts and crafts, but intruding on every element of existence. This period lasted until 1880 and during this time Native pottery steadily declined.  More and more, it reflected influences from the decorative arts of Spain and later those of Mexico.

“The Revival period began in 1880, the date when the first train arrived in Santa Fe.  Revival pottery did not draw sustenance from a living tradition.  It was rarely made for Indian daily life or ceremonies.  What it ‘revived’ was the style and decoration of pots that were hundreds of years old and known to contemporary potters courtesy of the anthropologists.  Revival pottery was, from the outset, tailored to suit the tastes of its sole consumer, the Anglo.  If it is ‘traditional’ in any way, then that tradition must be seen as satisfying the Indian fantasies of another culture by offering up a heady ‘noble savage’ brew in form and pattern.

“The Revival movement was the invention of an unlikely all-Anglo cabal of players: traders, archaeologists, and anthropologists, aided and abetted by the massive marketing power of the Harvey Hotels and the Atchinson, Topeka, and Santa Fe Railway (AT&SF).  The railway and hotel companies advertised Native crafts as a means of luring tourists and set up gift shops at the hotels, as well as running tour cars and buses that took visitors directly to the pueblos to buy from the Natives themselves.  For over three decades this campaign of selling the Indian to American tourists was the work of a single man, William Haskell Simpson.  From 1900 until his death in 1933 Simpson—who had only the most superficial understanding of Native culture—directed the AT&SF’s advertising, drawing in a team of skilled writers that included Charles Lummis, Zane Grey and others.  The railway and hotels were a step further and assisted the Indian craftspeople, providing tools and materials, particularly for the jewelers to ensure that they had enough product to sell to their passengers and guests.

“This is where the Free Spirits enter the story, pathfinders seeking a new role for Native potters that will allow them to speak with greater authenticity and independence.  Hopefully, while not a panacea for all ills, their work may provide one route out of the current market impasse. . . What the Free Spirits have in common is that they do not want to be hyphenate artists trapped in a quasi-tourist and ethnic market. . . Yet their freedom is still circumscribed. Tribal loyalty and pueblo rules still play an active role in their aesthetic choices, limiting their expressive freedom.”