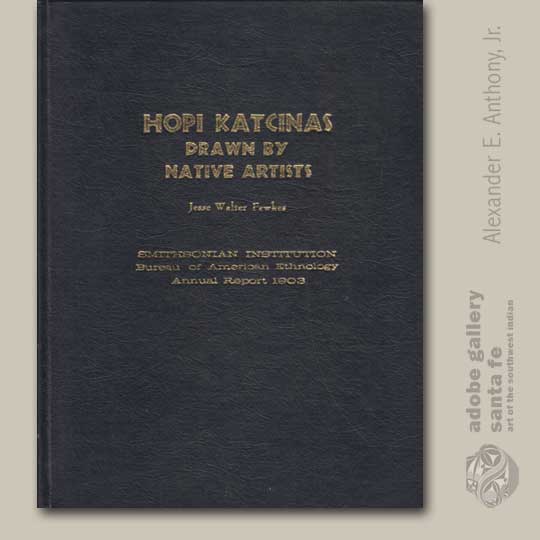 Provenance: from the estate of Frances Balcomb

Jesse Walter Fewkes found several Hopi men competent to paint a collection of pictures of the kind desired, and finally chose for that work Kutcahonauû, or White-bear, a man about 30 years old, who was believed to be the ablest of all who were considered.  This Hopi had picked up a slight knowledge of English at the Keams Canyon school, and while his method of drawing may have been somewhat influenced by instruction there, this modifying influence is believed to be very slight, as the figures themselves show.

His uncle, Homovi, who has never been to school, and is unacquainted with the English language, drew some of the best pictures, the technique of which is so like his nephew’s that it is safe to conclude that the drawings of the latter are aboriginal in character.  A few of the pictures were drawn by Winuta, whose work, like that of Homovi, is unmodified by white influence. (There are 63 katsina illustrations).