IN CONTEMPORARY RHYTHM – The Art of Ernest L. Blumenschein [SOLD] 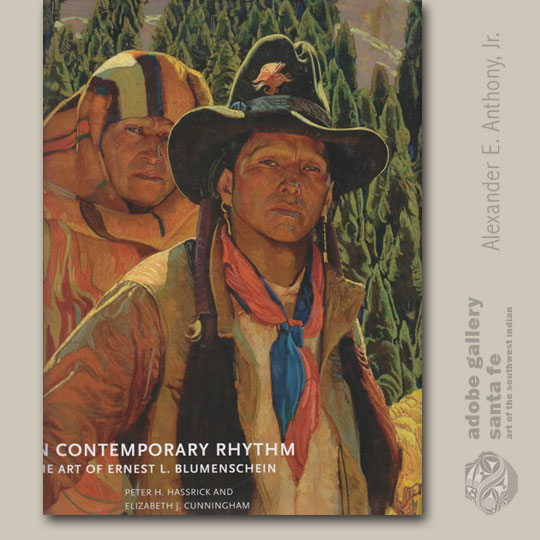 IN CONTEMPORARY RHYTHM – The Art of Ernest L. Blumenschein

In Contemporary Rhythm shows that, far from simply a western painter, Blumenschein is a major figure in twentieth-century American art, bridging traditionalism and modernism.  As the only book of its kind available on this influential artist, it is a major contribution to American art history. It is also a visual feast.

“One of the founders of the Taos Society of Artists, Ernest L. Blumenschein (1874-1960), was perhaps the most complex and accomplished of all the painters associated with that pioneering organization.  While not especially prolific, he won critical acclaim that transcended regional confines, and his work continues to be greatly admired.

“This volume is the definitive work on Blumenscheim’s life and art, reproducing masterworks from a new exhibit along with additional works and historical photographs to form the most comprehensive assemblage of his paintings ever published.  In Contemporary Rhythm describes not only his place in the Taos colony and western art but also his far-reaching influence on mainstream American art and national aesthetic developments.

“The text by Peter H. Hassick and Elizabeth J. Cunningham draws on Blumenscheim’s papers as well as other archival sources to explore in depth the dimensions of his multifaceted life and his place in American history and culture.  They examine his sixty-four-year artistic career, first as an illustrator and then as a painter, revealing how his technique evolved and how his schooling and the artistic movements of his time informed his work.  The authors demonstrate how Blumenschein’s musical training profoundly influenced his painting, and they address issues overlooked in previous studies, such as Blumenschein’s pivotal role in helping to preserve American Indian culture.”