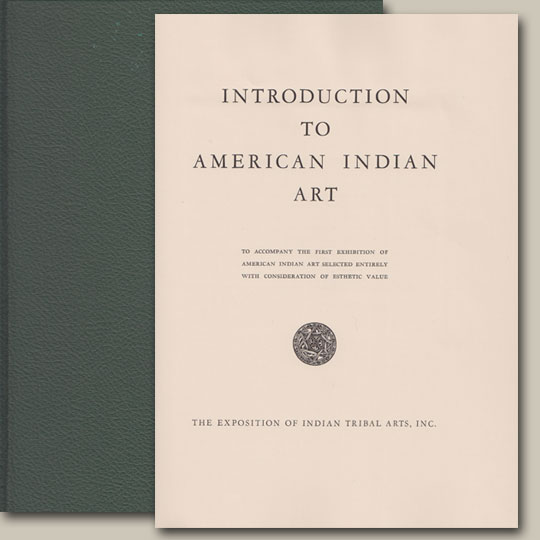 by John Sloan and Oliver LaFarge

It contains the overall Introduction to the Exhibit with 58 pages and 35 color and black and white illustrations.  The Editorial Board was Frederick Webb Hodge, Dr. Herbert J. Spinden and Oliver LaFarge.

The Exposition of Indian Tribal Arts, Inc., was organized in 1930 for the purpose of stimulating and supporting American Indian artists by creating a wider interest and more intelligent appreciation of their work in the American public at large, and to demonstrate to the country what important contribution to our culture the Indian is making.  To this end, an exhibition of Indian products in the fine and applied arts, selected from the best material available, both old and new, had been arranged.

The exhibition opened in New York on November 30, 1931 and continued to principal cities of the United States, on tour for about two years’ duration.  The principal tribes in the exhibit included prehistoric and the Eastern Woodlands, tribes from the Southeast, Great Plains, Central Plateau, Southwest, Northwest Coast and California.

The intent of the exhibit was to select items based totally on their aesthetic value, not ethnographic value.  Museums always collected Indian-made items with scientific intent, placing a beautiful vase alongside a cooking pot, without evaluating the artistic value of either.  This exhibit chose to elevate the best of the best for display and distinguish those from the routine tourist souvenirs many Americans associated with native cultures.