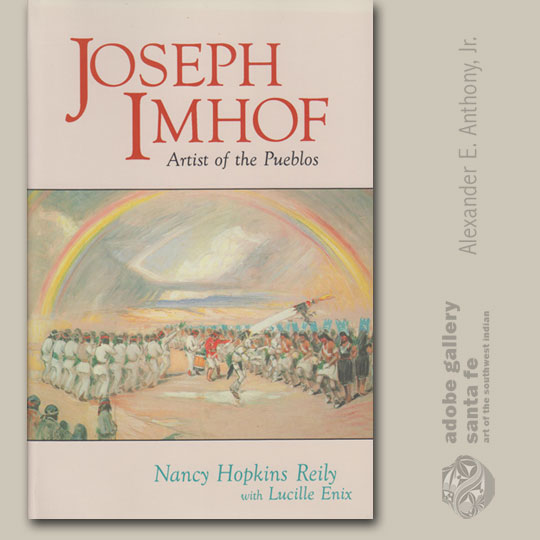 JOSEPH IMHOF Artist of the Pueblos

“Joseph Imhof, a master lithographer and painter, recorded the American Pueblo Indians’ way of life from 1907 to 1955.  Unlike other New Mexico artists of that time, Imhof chose not to use his art to interpret the Pueblo Indians.  Rather, his works present anthropological information with such authentic detail that the Pueblos recognized him as an authority on their customs and life.  They called him the Grand Old Man of the Pueblos.

“Nancy H. Reily and Lucille Enix chronicle the life and art of this master lithographer, inventor and self-taught artist who counted among his friends ‘Buffalo Bill’ Cody, Mabel Dodge Luhan, and E. Martin Hennings.  Until now, this unique American painter has remained elusive, undiscovered by many, partly because he lived in the shadow of other artists and writers who made themselves more visible during the Golden Age of Taos, New Mexico.  Yet Joseph Imhof’s work will undoubtedly leave as much of an impact as any other early American artist.”