JOURNEY TO THE HIGH SOUTHWEST A Traveler’s Guide 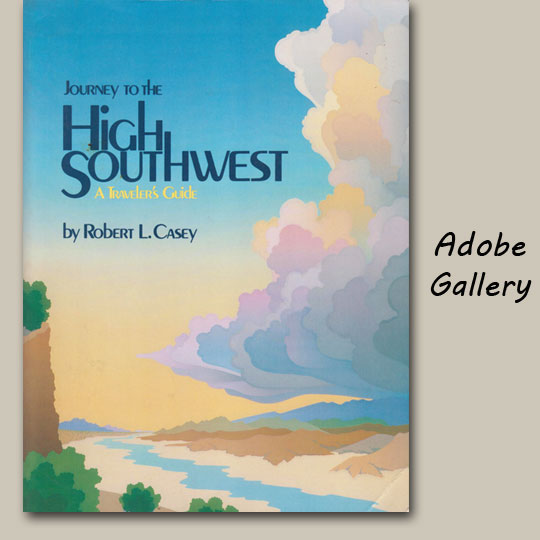 Journey to the High Southwest: A Traveler’s Guide

This book is arranged into four sections:

Robert L Casey inherited his curiosity and boundless enthusiasm for the High Southwest from his parents, who were visitors there early in the century.  From the author’s first summer visit to the High Southwest in the forties, through his successive summer vacations there—both with his parents during his childhood and later with his wife and two children, Casey has gleaned a brimming hatful of lore about one of America’s most scenic and historic regions.  His early interest in Pueblo pottery has flourished into an extensive collection of folk crafts from the American Southwest, Mexico, and Ireland, which the author and his wife have collected over the last twenty years.

I first met Bob and Mary Casey when they visited the gallery in Albuquerque’s Old Town while researching for this book.  We continued seeing them over the years as they visited us in Albuquerque and our new location on Canyon Road.  We were pleased to be one of the destination recommendations in this book (p.333).

“You are invited to drink in the mysteries of a region that includes the Spanish Rio Grande towns of Santa Fe and Taos, some spectacular national and state parks and monuments such as Mesa Verde, Capitol Reef, Canyonlands, Dead Horse Point, Arches, and Canyon de Chelly, and some authentic ‘Wild West’ mining towns, including Durango, Silverton, and Telluride, Colorado.  In addition, you will delight in Casey’s narrative accounts of various trips you can take in this region, and you will find practical travel information on lodging, restaurants, shops and museums, cultural events of interest, and travel strategies that will help you steep yourself in the High Southwest experience.”