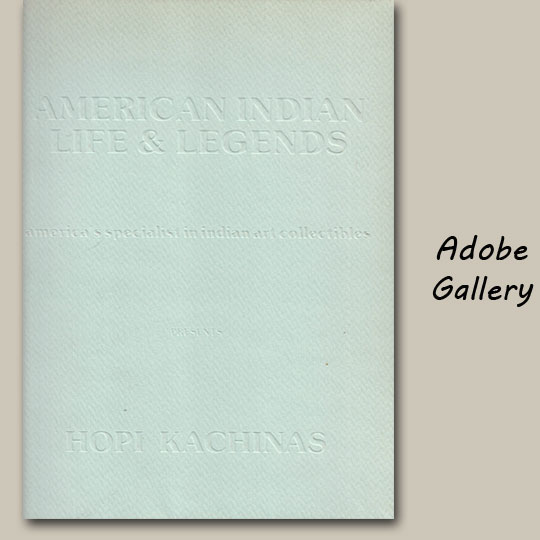 This portfolio was issued by American Indian Life and Legends of Flagstaff, Arizona, in 1984 for the sole purpose of selling ceramic productions of katsina dolls that had been traditionally carved by Lowell Talashoma and Neil David.  The two artists carved katsina dolls, then the company made molds from the carvings, and cast ceramics from the molds.

The contents of the portfolio include letters offering the ceramic katsina dolls for sale, a reproduction of a photograph of Lowell and one of Neil, both from photographs by Jerry Jacka, photographs of the katsina dolls being offered by both artists, and a booklet “Understanding and Collecting Kachinas” written by Will Graven.

The portfolio is excellent documentation of a phase of commercialization of Hopi Katsina dolls by respected Hopi carvers Neil David and Lowell Talashoma.  The company did not endure, so very few of the dolls were produced in ceramic form.