Kachinas - the Barry Goldwater Collection at the Heard Museum [SOLD] 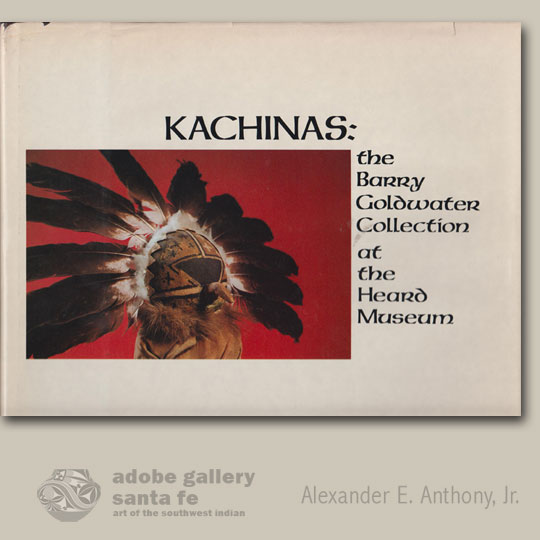 Kachinas: the Barry Goldwater Collection at the Heard Museum

Within the vast Navajo Reservation in Arizona lies the small homeland of the Hopi Indians. Although formerly their lands covered almost the entire northeastern quadrant of the state, they are now reduced to a few mesas. These rocky mesas jut westward into the high desert of the plateau like jetties into an encroaching sea. The mesa tops are thinly coated with sand and soil to support occasional juniper, sagebrush and in rainy seasons a sparse stand of grass. Around the cliff-lined perimeters water seeps out in intermittent springs. The sand dunes which collect on their slopes are washed down by the summer thunder storms to be spread on the valley floors. For hundreds of years this has been the chosen land of the Hopi tribe.

These durable people have resisted not only the natural forces of drought and disease as well as enemy people who raided and pillaged or demanded acceptance of alien ways but also resisted the subtler attacks of cultural infiltration. Following their annual cycle of planting and harvesting with an occasional hunt for small game, they have resisted all encroachment for over four hundred years. Tides of Navajo, Spanish and Apache, and Anglos have surged about their mesas and still they hold fast.

Upholding them in their resistance to change and in their ability to wrest a living from an inhospitable environment is their religion. It is seldom that a religion is as all-pervasive as it is among the Hopi where it incorporates almost every aspect of their lives. In fact, it is difficult to discover a Hopi activity that does not have religious overtones. It is a religion which aligns a pantheon of supernatural deities, ancestral spirits, and benevolent forces on the side of the animistic Hopi. It also wards off the few truly malign forces that affect the Hopi world.

The relationship of the Hopi to the supernatural is that of equals belonging to different halves of the universe yet following similar lives. This duality reiterates its presence in all parts of Hopi religion and without knowledge of its importance the understanding of one religious facet, namely kachinas, is impossible. The concept of equal but different has allowed a system of obligations and payments to be the normal method of interaction...

This is a publication of the katsina doll collection presented to the Heard Museum by The Honorable Barry M. Goldwater in 1964.