Illustrations of the MANNERS, CUSTOMS, and CONDITION OF THE NORTH AMERICAN INDIANS [SOLD] 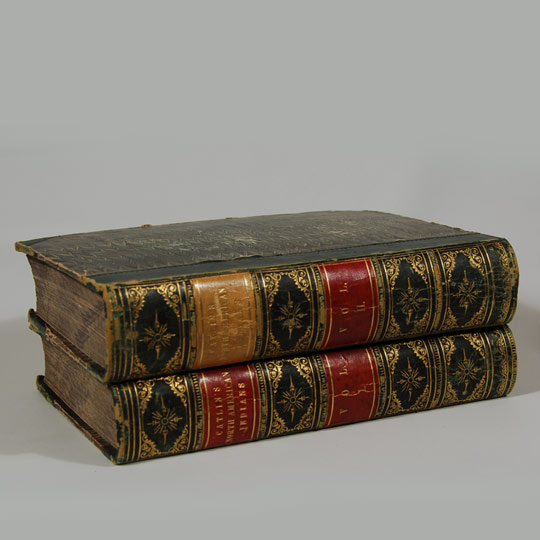 From the Author: "...I started out in the year 1832, and penetrated the vast and pathless wilds which are familiarly denominated the great 'Far West' of the North American Continent, with a light heart, inspired with an enthusiastic hope and reliance that I could meet and overcome all the hazards and privations of a life devoted to the production of a literal and graphic delineation of the living manners, customs, and character of an interesting race of people, who are rapidly passing away from the face of the earth—lending a hand to a dying nation, who have no historians or biographers of their own to pourtray with fidelity their native looks and history; thus snatching from a hasty oblivion what could be saved for the benefit of posterity, and perpetuating it, as a fair and just monument, to the memory of a truly lofty and noble race.

"I have visited forty-eight different tribes, the greater part of which I found speaking different languages, and containing in all 400,000 souls.  I have brought home safe, and in good order, 310 portraits in oil, all painted in their native dress, and in their own wigwams; and also 200 other paintings in oil, containing views of their villages—their wigwams—their games and religious ceremonies—their dances—their ball plays—their buffalo hunting, and other amusements (containing in all, over 3000 full-length figures); and the landscapes of the country they live in, as well as a very extensive and curious collection of their costumes, and all their other manufactures, from the size of a wigwam down to the size of a quill or rattle.

“A considerable part of the above-named paintings, and Indian manufactures, will be found amongst the very numerous illustrations in the following pages; having been, in every instance, faithfully copied and reduced by my own hand, for the engraver, from my original paintings…”

The two-volumes contain black and white engravings.  They are ¾ leather bindings with mismatched leather labels.  Ex. lib. without spine marks.

Condition:  Good plus condition, some abrasion to laid paper covers and some foxing of pages.  In Volume II, pages 257-264 are bound in upside down and backwards.  Libraries paper labels and seal.

WRITTEN DURING EIGHT YEARS OF TRAVEL AND ADVENTURE AMONG THE

WITH THREE HUNDRED AND SIXTY ENGRAVINGS,