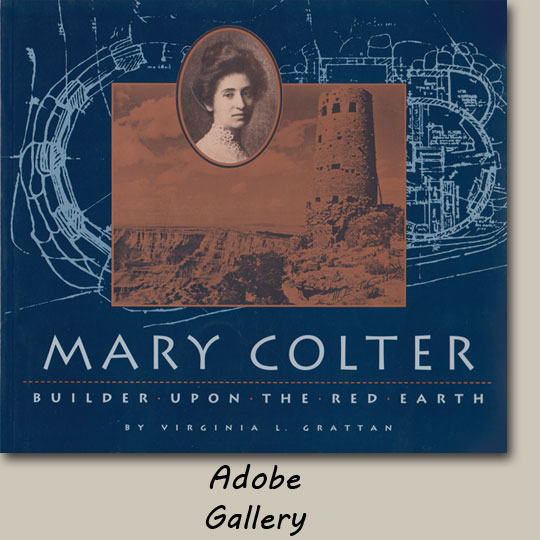 “On the south rim of The Grand Canyon are remarkable stone buildings looking as old as the canyon itself, resembling the ancient structures left by the tribes that inhabited this region long before Columbus.  They are the work of Mary Elizabeth Jane Colter, chief architect and decorator for The Fred Harvey Company from 1902 to 1948.  Trained in San Francisco in the 1880s, Colter became a major exponent of the revival of Southwestern cultural influence in architecture.

“The Grand Canyon remains the showplace for this singular woman’s art.  Her buildings mark the far extremities of the south rim—Hermit’s Rest, eight miles to the west of Grand Canyon Village, and the Watchtower, twenty-five miles to the east.  In between are several more of her designs, including rustic Bright Angel Lodge; Phantom Ranch, at the bottom of the canyon; Hopi House; and The Lookout. This is the biography of an extraordinary woman.  It will appeal to a variety of readers: those interested in the history of the Grand Canyon buildings, the Fred Harvey Company, and the Santa Fe Railway, as well as those with an interest in architecture, interior design, Native American art, and women of accomplishment.”