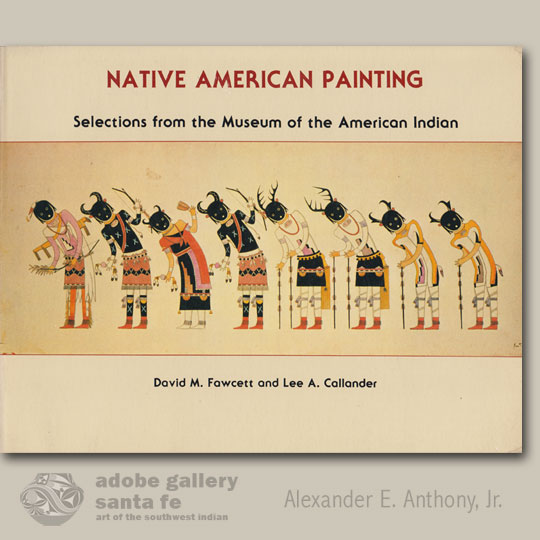 NATIVE AMERICAN PAINTING - Selections from the Museum of the American Indian

Softcover, first edition, 1982. 95 pages, illustrations in color and black and white. There are 71 illustrations of paintings and a list of every Native painting in the museum’s collection.

The authors of this catalog have attempted in their selections of the works that are illustrated, and those that are included in the exhibition of which the catalog accompanies, to focus on a  representative selection from the much larger number of works in the entire collection. They range from early ledger drawings executed in the mid- to late-nineteenth century to works done in varied compendium.

The penetrating thread? The works are Indian.  And they consistently reflect their Indianness.  They spell out a continuum: one that began long, long ago, perhaps in a bleak western canyon where, in the bright searing sun, an artist outlined a figure against the rock wall with pigments fresh from mixing.  Where a creative human being set something down about his or her people. Said something he or she was compelled to say.