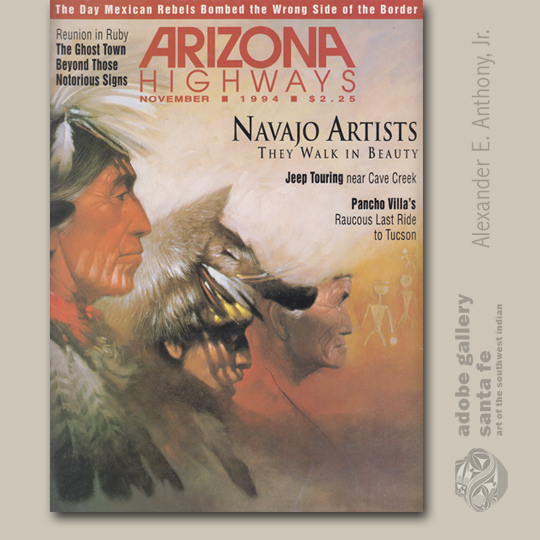 NAVAJO ARTIST They Walk in Beauty in Arizona Highways November 1994

Many Diné artists began learning skills when they were very young-weaving small rugs, making pottery animals, painting on cardboard or paper or making baskets. Living on the Navajo reservation, these youngsters were taught to appreciate nature and her creatures and to respect their homeland. It is those lessons that have been carried forward in art expressions. The article on Navajo and their art features art objects in pottery, textiles, jewelry, paintings, sculpture, baskets, horse tack, and sandpaintings.

Ruby, the Ghost that Came Back

Ruby is one of the best ghost towns in Arizona

An American pilot dropped bombs on Naco, Arizona, for Mexican rebels during the 1929 revolution, the only time the United States has ever been bombed from the air by a foreign power

Poncho Villa spent four days in Tucson, Arizona, in 1913 after escaping from prison in Mexico City

The Navajos and Their Art