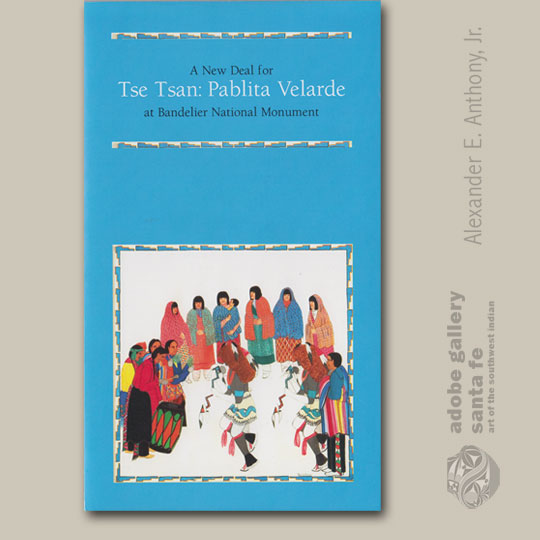 One published by Bandelier National Monument

One published by Enchanted Mesa of Albuquerque

At the age of nineteen, Pablita Velarde (1918-2006) Tse Tsan - Golden Dawn of Santa Clara Pueblo was commissioned by the National Park Service, under the Works Progress Administration—one of President Franklin Roosevelt’s New Deal agencies— to create scenes of traditional Pueblo culture for the visitor center at Bandelier National Monument.  Between 1939 and 1945 she produced more than eighty-four paintings in casein on Masonite, matte board, and glass. This is a six-fold brochure in color, with images or text on ten sections of the fold.

Enchanted Mesa Indian Arts on the east side of Albuquerque on Route 66, had an agreement with Pablita Velarde and Helen Hardin to represent them exclusively in the area.  As part of their representation, Enchanted Mesa, owned by Margarete and Fred Chase, published a pamphlet of each of the artists. This is the one published on Pablita.